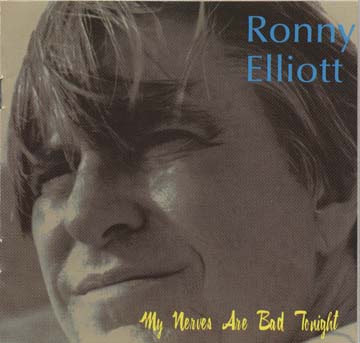 
"My Nerves Are Bad Tonight" is a quote attributed to cranky poet, T.S. Elliot. It's also something that Ronny Elliott's beloved grandmother used to tell him when she had the blues. Benny Joy, the late and legendary rockabilly genius, used the same phrase to describe his anxious moods to his younger compatriot.

It's also the title of Ronny's new CD on Blue Heart Records. With a release date of 1/1/00, the release marks the beginning of Ronny's thirty-seventh year, his fifth decade and his second century in rock'n'roll!

With able backing, as usual, from his eccentric band, the Nationals, the new record is a further twist down a familiar path of tall tales and autobiographical bull!

This one's not likely to threaten Garth's chart position or move Shania off the cover of PEOPLE, but it seems to be pretty much what he has in mind. As another hillbilly was once quoted, "I don't sound like nobody, sir!"


Go to my other
Ronny Elliott Website
with Bio & Articles

They Don't Rob The Trains Any More

He rode into town two or three times a year.
He'd kill a cowboy or two, then he'd go home.
The sheriff of Silver City didn't think of him as much of an outlaw.
The town folks cleared a path for  crazy, old Jerome.
And that old pistol that had belonged to his pop was big and it was rusty.
Jersey looked more Iike a mule than a stallion on any given day.
Voices in his head told Jerome that he was a bad man.
He thought of Jesse James and tried to live his life
that way.

Living alone gives time and rhyme to ghosts of the heart.
In a stream of stars old Jerome lay his plans of crime.
He wondered if Jesus thought of him as a killer or just a bandit
living here in the wrong time.
His sister, Louise, had tried to teach him good morals and manners
after his ma had left them for a full moon downtown.
He broke her neck and buried her out behind the outhouse
after he dressed her up in an indian wedding gown.

South By So What

We flew half way cross the country to shake and to rattle
and I was ready to roll when we got to Liberty Lunch.
Trying to be hip for the press was more than half of the battIe.
Those jerks from No Depression are an arrogant bunch.

It's south by so what in the city of Austin.
I've never been to Texas and I said so.
It's forty minutes on stage and back to the hotel.
Somebody tell Sir Doug I said hello.

Bought a little Mexican skeleton marionette somewhere downtown
and spent hours trying to teach him to dance at the Holiday Inn.
Stayed at the hotel bar too long for a 7-Up and Crown
and missed all the parties and the cool acts again.

It's south by so what in the city of Austin.
I ranted and raved and fell to my knees for the show.
That Texas crowd seemed really warm and friendly.
Somebody tell Sir Doug I said hello.

All I  new about the state I had learned from my grandmother.
"Texas, it even sounds country," is what she always said.
I can't tell one record company executive from another,
but before I kiss your ass I'd rather he dead.

It's south by so what in the city of Austin.
We had a lot of fun and I really did hate to go.
I'm not sure we made much of an impression.
Somebody tell Sir Doug I said hello.

Yeah, it's south by so what in the city of Austin, Texas.
I'll never be famous, Darrell Anderson told me so.
I'll make more of these records and I'll try to sell them.
Somebody tell Sir Doug I said hello.


My Nerves Are Bad Tonight

Harry's gonna have to eat his words, the girl was a
Midnighter. I've seen pictures of her in a tight skin up
on the stage.
It's gin and sin and reciprocal motion in the backfield
left over from the days when romance was all the rage.
In a shok to the system Little Ricky grew up to be a
beatnik. All the sirens in the Hollywood hills remember
the day when the artists and the angels and the models
danced the mambo and they lead the handcuffed
arnachist away.
(chorus)
"My nerves are bad tonight," I heard the poet sing.
"I'm rhyming verbs and trying to learn how to swing."

We had a dream all the karma in the world could be
bought with Budha's money. All the laptop, flip flop girl
groups sang the song of the gay caballero and his lovely
lesbian countespart and the ventrilliquist's red-headed
daughter who could do no wrong.
I've got a fire in my mind and I really can't be confined
here. There's a bomb in a boat anchored on the edge of
Havana Bay. I've got the red China blues and maybe a
touch of vertigo and a life up to it's neck in disarray.
With the wheel of time mired in the muddle of ecstasy
and the quest for glory not leaving room enough, it's
sticks and stones and seeds and bones and Blue Caps.
That's the price you pay for playing a game too rough.

She Sold The Silver

It's a classic story of two fooIs in love. Breaking hearts like beer bottle glass when push
comes to shove. There's a price to be paid for going where you shouldn't go, and I'm
taught my lesson again about reaping what you sew.
Some people play to win, some don't see it that way. I seem to play to lose. you break it
you pay.
They say passion makes a fool out of you. It's not a game you'll win.
I play rougher than most and I'm losing it again. I've done my time crawling on my
knees. Choking passion out of love once more, watching hearts break and freeze.

Masterpieces from the East and the West and a '54 Esquire out of tune.
News from the border, the phone's out of order with songs from a Tex Avery cartoon.
I woke up dreaming that Knocky was back and he was burning up the key board.
He was stinking of gin, looking crazy again. He played in waltz time and pretty music flowed.
Counting stars, closing bars, I do what I can for the soul.
All the rage on the wrong side of the water, working for Hooch close to home.
Burning both ends, counting on friends, I'm not walking on water alone.

The Doors Of Havana

Adios Havana. ola USA. Muchos gracias for your hospitality, but I didn't come here to stay.
I Iove your people and your countryside. I love your music and your rum.
If they had told me of your pain and misery, I never would have come.
(chorus)
I feel bad for the Cuban people without enough to get by,
but it's the dogs in Havana, that make me want to cry.

I'm not a member of high society. I'm not part of the ruling class,
But Fidel is a hypocrite and Strom Thurmond can kiss my ass.
I know your kids could use some medicine.
I see your buildings' peeling paint.
I condemn this damned embargo and the cold war's patron saint.

Let your mountains and your beaches shine with happiness once more.
Let the people of our countries live in peace forevermore.

I must have smoked a millon cigarettes last night in that hotel, one for every time I thought of you.
Thinking about where we've been and how did we get here, fighting the urge to call and fighting off the tears.
(chorus)
You know I Iove you, darling, and I always will. If you're hungry for love, just send me the biII.

Thought I'd get my fortune read by that gypsy down the highway, but I didn't have the nerve to ring the bell.
So I went back to my room and locked myself away. Watched tv and tried to break your spell.
When the sun comes up tomorrow. I'll open op the door. I'll come back and try this all again.

When I was just a kid in Birmingham and Uncle Murray turned on the radio
Hank Williams' music was the only thing they played.
I found WLAC and late at night Muddy Waters would sing to me
And those same three chords still ring in my heart today.
It's the samc three chords and the joy they bring,
It's not black or white, that doesn't mean a thing.
It's the hillbilly music and the blues they play,
It's the same three chords I'm playing today.
Then I found Elvis and it changed my life
and I saw Bo Diddley at the armory.
I talked my mother into buying my first electric guitar.
I sat alone in my room at night and tried to make the damned thing sound alright.
I thought those three chords were gonna make me a star.

Then the Beatles turned my head around
and Ike and Tina Turner set my soul on fire.
I promised myself a life as a music man.
I played the blues, at least I thought I did,
but John R. wasn't gonna spin any hillbilly kid.

Talking To The Man In The Moon

I'm talking to myself 'cause I can't talk to you.
I'm getting funny looks from people I see.
I know this feeling is nothing new,
but it's sure got a headlock on me.
When you look at me,
I really feel my confidence slipping away.
I can't tell anyone I'm working on a deal.
If anybody heard me they'd say
(chorus)
I'm sitting here crazy as a loon.
I'm talking to the man in the moon.

My big old friend hasn't been much help to me,
But then again, he sure has listened patiently.

When I that the nerve to tell you how I feel,
to tell you what I'm dreaming
One look in my eyes will tell you that it's real.
Just ask my friend up above.

Just rolled into town today, I'm lonesome, tired and hot,
I'd like to get a bite to eat and a couple of drinks, but 4 bucks is all I've got.
I'm playing a bar somewhere downtown, doing 5 long sets.
I've got a new set of strings, a couple of new songs and very few regrets.
(chorus)
Hotel room in Jacksonville, just like any other town
Hotel room in Jacksonville, sure gonna get me down

I'm leaving here for Birmingham, from there to New Orleans.
It's a long ride back home again for some of mama's good turnip greens.
I pawned my spare in Spartanburg, my license plate's expired.
I'd check out of here and make Atlanta by dawn but I'm too damned tired.


Best I can do

The poor want gold and the rich want heaven.
The rest of us are looking for a little peace of mind.
The words passed down always sound familiar.
Be nice and work for peace for all mankind. 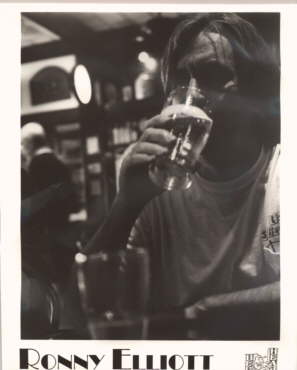