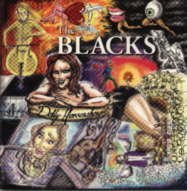 Strolling the Times Square side of Nashville, and strutting the Hollywood Boulevard side of Austin, TX -- THE BLACKS have as much to do with mainstream country music as a .25 peep show does with the latest LeAnn Rimes video (honestly now,
which would you rather see??). This is twisted, hard-core cowboys_in_lipstick jazz -- with ample flourishes of cabaret sophistication, swaggering Doors-esque rock 'n' roll, ragtime pathos, and primordial country blues. It manages to simultaneously spiral back to the beginnings of American roots music and rocket ahead to a gritty, lurid future.

Dolly Horrowshow, THE BLACKS' debut release on BLOODSHOT RECORDS (where The Waco Brothers, Robbie Fulks, Neko Case, Alejandro Escovedo and a stable-full of other piss and fire folks come home to roost) flaunts a rock-wallop and a upside slap of glitter glamour and jug band doo-dah -- honed to a sharpened-spoon edge by producer Eric "Roscoe" Ambel (known for his knob-twiddling work with the Bottle Rockets, Blue Mountain, and The Cowslingers). Dolly Horrorshow is soaked through with The Blacks' deep-throated three-part harmonies, a growling,  moaning trumpet, the shove and tickle of piano and organ, and a lascivious "LaGrange"-flavored musical leer -- "uh-how-how-how-howww..." -- and HOW.

THE BLACKS are led by Danny Black (vocals/guitar/trumpet) and Gina Black (vocals/upright bass), with Nora O'Connor on vocals, guitar and piano and James Emmenegger on drums. Easily Bloodshot's sauciest band (imagine a visual cross between Squirrel Nut Zippers and Nashville Pussy!), they'll snarl and coo their way into your heart -- and your britches --  with their crazed, gaudy gestalt that has whipped crowds of seekers into an eyeball-plucking frenzy for the past two years.
Now it's your turn to burn.