With heart, head and hips 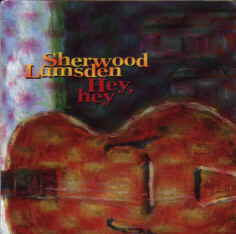 His rhythm as irrepressible as his hair, Sherwood Lumsden writes great lyric~- and honky-tonk music you can't sit still to, says Antonia Morton.

Catch Sherwood Lumsden on stage - preferably someplace intimate like the Great Canadian Theatre Company - and you know you're watching a true performer. Here's this good-lookiri' blond with a guitar and a twangy tenor voice, making the crowd laugh out loud at his story of the smuggled bathroom copy of Utne Reader that inspired his novel pairing of Elvis and Jesus.

When he gets into that song, the fun really starts  he's the kind of musician who throws his whole body into playing his guitar, dancing on stage with it. But eye-appeal aside, his lyrics are the kind you have to pay attention to - partlcularly in this song. It's no small feat to take on two Icons at once and be really funny, deeply irreverent l ("God's been talking to the devil about amalgamation") and, yes, even kinds serious and moving.

The crowd loves it: toes tap all over the joint. CKCU country music critic Chopper McKininon,  who's followed Lumaden's career (or years, says: "Sherwood has a really irrepressible rhythmic delivery, even on the show sonigs. I can't seehim play without wanting to dance, and I'm not a dancer."

Lumsden's straight-from.the-heart delivery, which sounds as if he's lust personally reinvented honky-tonk, is a big hit.

But it's his lively songwriting that may make him a star. Whenit works, there's a real poetic intelligence to it - not to mention an easy intimacy with country styling, both lyrical and musical. For the last couple of years, his shows have been a blend of favourite old songs from his first CD All I Need (1996), and new material from what's now his second - the rather unimginatively titlied Hey, Hey, whiich debuts today.

Lumsden has a wry response when he's  asked to talk about his development as an artist.

"Errratic and show," he says, running his hand through a dandelion tangle of hair. (Lumsden's unruly fair curls are as Irrepressible as his playing; even on album covers and publicity stills, it looks as if his hair has been tamed, with difficulty, just long enough for the photo shoot.) When he isn't in performing mode he's not exactly shy, just lot less wired. It's as if the extroverted performer and the introverted writer take turns sharing the same body: all that cockiness seems to get summoned up when he goes ontstage, and get packed away again when he comes off.

"I always tried to write. but I was well into my 20s when I took a writing workshop - and found that all my short stories came out like songs", he said. Was he the kind of music-in-the- blood kid who twanged his first guitar at the age of 7? "I probably did do that, but didn't pick it up again afterwards until I was 26!" he admitted. "I came to playing music pretty late."

What matured him as a performing musician, he said, was touring abroad -- which happened mainly because his first CD slipped through the North American genre cracks. "I realized nobody liked that honky-tonk folk style in Canada - it wasn't country, and it wasn't folk. But they liked it in Europe , and I grabbed hold of that."  Lumsden and his longtime friend and backup player Cameron Terrill spent three weeks touring Germany and Holland to rave reviews: German critics, who seem to know good rockabilly when they hear it , talked about his freshness and vitality.

"II'd been playing on and off in Ottawa for about 10 years, but never consistently enough to actually get any better in performance -- I'd always put my energy into songwriting." Lumsden said. "But playing 18 shows in three weeks made us a lot more solid."

McKinnon agrees, "Doing that trip, playing in front of total stranger, really boosted his confidence," he asserts. "He's a professional musician now -- befor, I don't think he was doing it fulltime enough for music to top his resume."

That resume is one of the starving-artist/jack-of-all-trades kind, that runs from growing up near Smiths Falls ("I've always played country, being as I'm from a farm" Sherwood drawled in his Ottawa Valley twang) to getting a degree in economics from the University of British Columbia. He spent three summers with a travelling carnival. worked in a mine in Northern Ontano ("I was a pretty bad miner, I used to bump into things all the time"), and did a longish stint as a supply teacher ("A new audience every day of Grades 7S and 8s really helped my performance skills"). Now 30, he brings in the bread and butter as a court monitor ("Weird and interesting work - It's dry stuff, but pretty fascinating") while preparing for this summer's European tour.

A lot of that experience comes out in his songs - especially in Hey, Hey, which in many ways Is more personal than All I Need. The first CD s'as a mostly blithe collection of hurtin' love songs, which could lead a fan to assume that Lumsden has spent his personal life in a series of catastrophic affaires du coeur. He laughs shortly: "Well, country songs are like that, it's defined by the genre. Loss in love is really a metaphor for loss in life when all your expectation and dreams aren't met."

It's failure to achieve, rather than loss, that seems most dominant in Hey, Hey Lumaden's scope broadens from romantic relationships to include personal tales about hts mother, his brother, and the old family farm. Several also deal with the3 artlisit's ambivalent attitude to what William James called "the bitch-goddess" of ma terial success Songs like I Ain't Quite Got It and Honky Tonk Man in Chinatown all talk in their different ways, about the longing for money and respectability that's eternally at odds with a musiciani's desire for freedom from material ties.

The jaunty, assured Soon as I'm Through, in particular, seemis to express a longing (however tongue-in-cheek Lumsden meant it) for a saner, tidier life: "I'll sit down and do my taxes/Wash the towels, read my faxet/Soon as I'm through missing you." Sounds almost like secret urge to live in a suburban duplex rather than in the tower of song.

That urge seems expressed again in a lovely song be had seldom performed (probably because its theme of late-onset maturity isn't a sure-fire crowd pleaser): A Touchof Grace, a gentIe, melodic ballad to reconcilliation with life-. Coming right after this, the fierce bravado and jerky rhythms of Wilder Now - rougher and tougher, with its theme of cutting loose - has a desperate edge.

Two or three songs on Hey, Hey (including the title track) fall off the end of the listenability bell curve. But Lumsden's new CD is more reflective and mature than his earlier work, and musically more cohesive. As McKinnon say's, "Its obvious a lot of work went into its product."

Still, for all the charm of his words, musical arrangements and voice - which (especially when he retires the twang and sings au naturel) has a seductive quality that can give real pathos, or real devivry, to a  song - you definitely get the best value for your Sherwood dollar catching him live.

He's got great music, intelligent lyrics, and-a delivery with real sex appeal. To paraphrase a comment of MeKinnon's: Sherwood Lumdsen's a music comes from the heart, gets a good working over in the head, and emerges at the hips It's two parts Jesus, one part Elvis.

Singer/songwriter Sherwood Lumsden made an excellent opening act. Performing his own refreshingly sincere songs; the Ottawa Valley native showed  his country roots in his twangy vocals and honky tonk style.

His new songs, including the humorous Jesus and Elvis, had a less mournful flavour than those on his debut CD, All I Need, but I preferred the nostalgic sense of reflection found in pieces such as the melodic Alberta Rose, a song written for his mother, and River Don't Run,  about growing up along the Rideau River, Lumsden's long-time friend, Carneron Terrill· provided expressive back-up guitar work.  Look for a new CD from Lumsden this year.

S omchow Sherwood Lumsden has condensed a lifetime of experiences into his second album, Hey, hey. Set for release tonight (Thursday, June 25) at Babylon (317 Bank), this concise and charming portrait is unlike his debut disc, the traditional country album, All I Need (1996).
"This CD is less genre-specific than the last one," Lumsden emphasizes.
Hey, hey opens with feedback and builds to its rootsy/jangly conclusion with rockabilly and bluegrass-inspired numbers in between.
Indeed, Lumsden counts among his varied influences Jimmie Rodgers, Gram Parsons, Buddy Holly and The Clash.
"I guess it's like Chris Isaak too, but I can't afford to dress as well," he quips.
Lumsden's near-yodels and sweet, twangy vocals - like Isaak's - underscore his poetic, pognat lyrics.