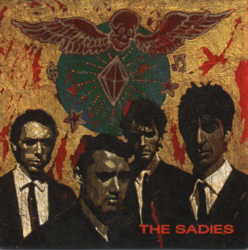 Toronto's masters of musical mayhem have retiirned to the surface with a gem, a monster. After months of laboring blindly in a dark, moist, cavernous laboratory-the walls slick with the blood and the love of their musical forebears, the dank air charged with reverb, fiizz, and delay, and cob-webbed corners filled with the scunying sounds of fiddles, dobros, and banjos--The Sadies have stumbled back to the light, bringing with them "Pure Diamond Gold" It is an unwieldy beast; it stumbles, it rocks, it croons, it swoons, it smokes, it swings, it knocks over drinks, it pushes sniveling, timorous townspeople out of the way with a single swipe of its mighty hand.

Two LPs specially priced on one CD, "Pure Diamond Gold" has been stitched together for your pleasure, for your amazement, using only the choicest cuts of surf, spaghetti western spookiness, garage punk' country murder ballads, and gospel. Songs from the 7 O 'Clock Chicken sessions were recorded by Blue Rodeo's Greg Keelor at his legendary farm. They feature special appearances from the Good Brothers, Canada's most famous bluegrass outfit, well known on the European festival circuit, who also happen to be father and uncle to the two tallest Sadies, Travis and Dallas. Their Mom and their dog even make cameos.

The material from the Pure Diamond Gold sessions, like The Sadies' 1998 Bloodshot debut "Precious Moments," boasts the recording work of ubermensch Steve Albini. Catherine Irwin (Freakwater) and Kelly Hogan (The Jody Grind, ex~Rock*A*Teens) stop by for a couple of stunning little numbers, as well, and put a pretty face on this lumbering monster. And the whole monster is swathed in creepy cover art created by Bloodshot's own mad scientist, Jon Langford.

"Pure Diamond Gold" emerges hot on the heels of The Sadies' European blitzkrieg as the backing band for R&B wildman Andre Williams; their Bloodshot CD "Red Dirt" was released this past May. They've also backed our favorite hoedown diva Neko Case on several sweeping tours, as well as on two Bloodshot singles. Jt's alive, alright. And this monster is a good thing to have on your side.

Even the names of Sadies guitarist-singer Dal Ian Good and his guitar, fiddle and mandolin-tot ing brother, Travis, sound archetypal of the Old West, but they're ambiguous archetypes like the characters in one of Cormac McCarthy's blood- soaked, apocalyptic westerns, where being a Good is not so simple as being good. McCarthy's novels inhabit a perilous, order-less realm where judges smile malignantly, preachers fight losing battles with their own demons and cherub-faced boys are latentpools of unblinking violence. Dallas may be a Good, but he's better when he's bad.

On the Sadies' debut album, Precious Momenis, Dallas and Travis play outlaw music. While bass ist Sean Dean and ex-jale drummer Mike Belitsky lay down the galloping rhythms, Dallas and Travis sing about irrational violence that only makes sense in the context of frontier mythology, while their guitars and fiddle sing about gentleman bandits - polite and slow to anger, but lethal. But despite being baptised in country music - their father, Bruce and uncles, Brian and Larry are mem bers of one of Canada's most popular, long4our- ing country groups, the Good Brothers - Dallas was slow to come around to playing country, and even then, it was the bad boys of country who captured his imaginatiots.

"Travis and I have watched my father evolve with his music" explains Dallas, "and it's gener ally revolved around the mainstream pockets of country because that's where they've been ac cepted. whereas the only things that really excited my brother and me were punk rock and stuff that was either really funny, totally laced with sin and debauchery or totally tough. It's not a matter of just writing off the prettier sentimental stuff, but I always liked the outlaws best: Merle Haggard, Johnny Cash, George Jones"

"I've always played in punk rock bands ever since I was a kid, and Travis did, too," says Dallas over the Yardbirds record blaring from the speakers. "But we never set out to contradict what my father did, and if anything, he was really influential in turning me on to what I like. Basically, the switch with the Sadies' sound just came about when my brother agreed to join, which was after Sean and I had been playing together for about two years and developed a big list of songs, mostly instrumental. My brother just added a to tally different style of playing. But the main in fluence that stuck from my dad's band was that they've always been considered a good bluegrass band. My Uncle Larry is a fantastic banjo player, and it's always been a strong portion of their live performance. and my brother and I have always been able to 'appre'ciate. through the musician ship, the themes of the music that generally come from more remote regions of the States."

In fact, the Sadies' ethic is much closer to that of their father's band than their insurgent coun try contemporaries - even those on their Chicago-based label, Bloodshot, which is also home to Alejandro Escovedo, the Waco Brothers and Neko Case, who contributes vocals on Precious Moments' "Cowhand." While much of the No Depression nation's country-rock wing is essentially the Replacements with extra twang, the Sadies cleave closer !'o hillbilly and bluegrass traditions, albeit Jirtied up with instrumental rock wattage.

Dsllas clearly identifies more closely with country sod bluegrass traditions, along with the instrumental rock he plays as guitarist with Phonocomb, than with insurgent country.

"I'm a strong believer in what Bloodshot does, and some of the stuff they do is really great but it just never occurred to me that a label like that would ever be interested in us. We don't do it straight ahead. If anything, Ithought people would have put us in an instrumental category, but we never set out to be a tough band. I think that's something that's a product of insurgent country - people who are really inter ested in only the dirtier side. What it's about to me is more a matter of taste - we do killin' songs because they're mostly in minor keys.'

"Instrumental" isn't completely accurate, but it's at least broad enough to cover the many inter sections of the Sadies' musical genealogies. Con sider that when rockabilly was revived in the late '7Os and early '80s, no one was calling it roots rock. If anything, it was punk. Consider also the countrified twang and bent chords of surf rock.

"Country and surf have always been close," says Dallas. "Have you ever heard that Nashville Rebels album - Waylon Jennings and Chet Atkins? All their songs were heavy guitar riffs repeated over and over, and I could totally hear the Ventures doing their songs. Working with Phonocomb, I've learned a lot about obscure in strumental music where I was the big Link Wray fan, they were the big Ennio Morricone fans. I was a big Shadowy Men fan and always will be, and I draw from that a IOL We've gone that route because we like those sounds. But I don't want our press to mention Morricone, because it's too easy, and it's also misleading. A lot of people expected Phonocomb to be a surf band, so we would get kids with creepers and flat-tops and Ventures shirts at our shows, and I love that stuff, but if we ever set out not to be something, Phonocornb set out not to be a surf- group."

There it is: the Morricone comparison that con tinues to dog the Sadies at every turn, But so much of our stories and mythologies about the West comes from movies, and given the close associa tion between westerns and music, country music is one of the most visual and narrative of gen res. Their looming twang and steam engine rhythms do conjure up imagery of ill-intentioned hombres, but the Sadies' sound actually harkens back further than tumbleweed kitsch and the stylised, violent sagas of spaghetti westerns. Precious Momenis is a consummately cinematic al bum that makes me visualise John Ford westerns from the '40s that dramatise the West as it fictionally existed 50,60 years earlier, without sounding derivative, anaclsronistic or retro, per haps because of what might best be called re spectful irreverence.

"There is a fine line between blasphemy and doing justice to a song. On one song on the al bum, 'Cheat,' my brother and I clip-clopped on it with our mouths, and we've always done that live, and it was really fun, but now when I hear it under a microscope, realising that this is ac tually our first release and people are gonna be objective when they hear it, it does make me nervous. I would hate to be branded as making fun of anything we do.

"But to be compared to a composer like Ennio Morricone means that I have achieved my mission. which is to create soundacapes - lit erally, instrumental music that makes you cre ate your own lyrics out of a sound association. I don't mind not saying much literally, not saying much lyrically, as long as the music tells stories. Sean is really serious about making videos for our songs. but shot in Super 8, and the songs are short, so it's fairly realistic to do something like that."

Dallas takes a long drag on his omnipresent cigarette and adds with a chuckle; "And I assure you, there'll be no gunfights or saloons."