Ruthie and the Wranglers 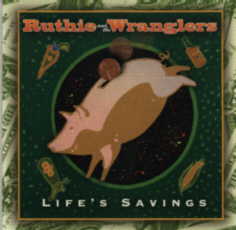 Their sound has landed them on main stages nationwide. In 1997, the Washington Area Music Association awarded them Best Country Album, Best Debut Recording and Best Country Group. "Prime Time Country," Billboard, Gavin, No Depression and Americana radio DJs, have all praised this Washington, DC based quartet.

In true Americana fashion, "Life's Savings" is full of Honky Tonk, Country, Rock, Rockabilly, even Bluegrass influences. Best of all, it proves that Ruthie and the Wranglers have a quality, action-packed sound, all their own.

1) What Mama Don't Know, the first track, captures the spirit and quality of musicianship you can expect from this entire album. Ruthie simultaneously swaggers and storms through her bluesy. country lyric. while the band takes you on an unpredictable but somehow famil iarly comfortable ride.
2) "Did she say what I think she said?" That's what everybody says after the first chorus of He's a Honky Tonk Man. Leave it to Ruthie and the Wranglers to test the waters with this more than amusing, clever and catchy. honky tonk shuffle.
3) Her genuine delivery of A Dime at a Time twisted with searing guitar and bizarre fills stretch this Del Reeves classic to the limit.
4) Getting down to baritone basics-rootsy tremolo guitar lays the groundwork to pour on the down-to-earth crooning on the soulful. americana. whiskey soaked, Thinkin' and Drinkin.'
5) Don't Bug Me Baby allows Ruthie to strut her stuff featuring ripping neo-rockabilly guitar and a jumpin.' swing-style rhythm.
6) The Farewell Polka-Mathieu's own Buck Owens influenced finely crafted and confidentl~ executed instrumental-has a catchy melody, a killer tone and a contagious groove.
7) Not even Ruthie herself could have predicted that she would come up with this slow and powerful waltz expounding on a relationship in need of time for emotional healing. On Forgive and Forget, a mesmerizing delivery, enhanced with classic piano and layered guitar, proves that the band has the abilitv to survive in the commercial world. A melodic beginning is strongly contrasted by an emotional vocal climax laced with bluesy from-the-heart guitar screams.
8) One More Lie is an album highlight. Ruthie shows off her authentic country vocals on this country classic. Through state-of-the-art production, Noone manages to preserve the bands rootsy style. One More Lie shows off one of the finest examples of the bands ability to create solid harmonies and great music.
9) The revved up rockabilly cut I'm Satisfied was written by Washington DC area rockabilly king Billy Hancock. It's simple, sassy and really swings.
10) A hard driving rendition of Fist City kicks A-#@! * with relentless rhythm, feisty vocals and aggressive guitar.
11) (I'm Gonna Kill Myself If It's) The Last Thing I Do. This is a lohnny Cash inspired auto biographical song that Ruthie articulates (at breakneck speed) implying she is so busy she doesn't even have time to end it all 'cause there's too dang much to do! Combining Surf, fast Bluegrass and Merle Travis/Scotty Moore guitar styles, this is a great way to top off an album full of musical surprises.