"Dark Side Of The Mersey" 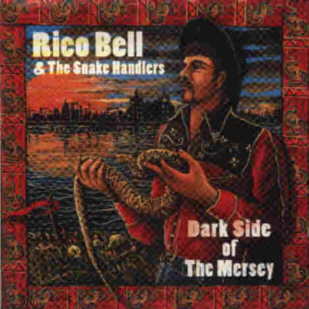 Think back a-ways to your formative years. Were you the prom king, the star cheerleader?
... Hell no, I thought not. You were a loner, a misfit, too smart for the stoners and too disenchanted for the nerds, maybe. That was you in the desk in the corner listening to music on your walkman instead of the lecture. When you showed up for class at all, that is. Because many times, when the thought of actually setting foot on the academic linoleum sent waves of nausea cascading over your skinny bod, you took a left at the light on Main Street, and ended up somewhere dark and smoky, where your prized fake i.d. earned you a barstool, an ashtray, and a beer, and where the music was loud, bracing, and the only thing in your whole wretched life that kept you sane...

Well, friends, I'll have you know that long before joining up with punk stalwarts The MEKONS in 1 986 and becoming the world's sexiest accordion player, RICO BELL was a sensitive chile just like yourself. On his second solo release on Bloodshot Records (the first was, fittingly, 1 996's "The Return of Rico Bell"), "Dark Side of the Mersey", Rico and his accordion -and his guitar, harmonica, and melodeon- sear through the skin and straight to the heart of life on the wrong side of the river, where teen Rico would ditch school and hop a ferry across the Mersey to catch the Beatles at the Cavern.

Rico's crack U.K. combo The Snake Handlers are punk statesmen all, with Brenny (THREE JOHNS) flailing lead guitar, Hugh Whitaker (HOUSE MARTINS) bashing drums & percussion, and Phil Mayne (Mook Records) on bass, and rounded out by Scottish laddie Roddy Johnston reeling on fiddle. They take the darker side firmly in hand and caresses it into submission. And soaring above the musical mayhem is that voice: Rico's whiskey-soaked croon can take a Patsy Cline tune ("Sweet Dreams" on The Mekons' insurgent country classic "Honky-Tonkin") and shred it to ribbons, transforming it from soothing ballad to gut- wrenching paean to pathos. On "Dark Side" he raggedly renders every barroom ballad, dockyard lament, and urban shanty with a guttural poignancy that could leave the most manly of you weeping in your cider. And as any Mekons fan knows, the surest way to redemption is through the warm tingle of a good buzz and the close comfort of hard, loud music.

So lock up your walkman -- there's a barstool waiting across town with your name on it, and the band is just plugging in.

Rico Bell & the Snake Handlers Dark Side of The
Mersey (Bloodshot)


Something's askew when a Limey releases one of the best Americana albums of the year1 but given that Rico Bell is a veteran of roots-punk pioneers the Mekons3 it kind of makes sense. Bell's accordion is never far from the front of the mix8 but he plays it mean enough to warrant a spot alongside the Flaco Jimenez in the Texas Tornadoes. Great songs too. (RS)