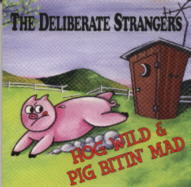 Say What?
"...built on traditional foundations... a structure unique in beauty and design."
No Depression

"The Deliberate Strangers have captured the balance of humor and pathos that made this country great. That's Country Music, partners."
Ed Masley, Pittsburg Post-Gazette

"I really love your CD - Kind of R. Crumbesque in a really cool sort of way."
Micah Solomon, Oasis Duplication

"The Deliberate Strangers may not be in touch with their spirit animals, but will sure as hell
know how to cook them if they ever come around."
Lissa Brennan, In Pittsburgh

The Deliberate Strangers are:


The Deliberate Strangers make their home in Pittsburgh, PA. The Band released the CD 'Hog Wild And Pig Bitin' Mad' on Payday Records in January 1997. The Insurgent Country Magazine, No Depression featured an article on the group in the May/June '97 issue, sparking interest on both sides of the atlantic. The Deliberate Strangers combine elements of traditional American music, such as Bluegrass, Honky-Tonk, Blues, and Swing with an attitude grounded in Post-Punk disillusion and roadside attraction humor.
They are hard at work on their next CD.