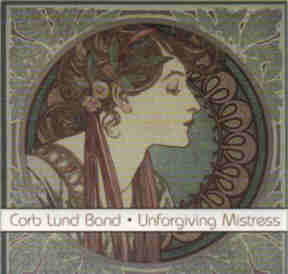 The Corb Lund Band is an all-original country blues band from Edmonton, Alberta. Formed in 1995, the Corb Lund Band began mostly as a vehicle for all three members to play music familiar to their Alberta roots outside of their other musical projects. After considerable interest and support from Edmonton audiences, the Corb Lund Band recorded their first full length casseffe titled Modern Pain in 1995. Modern Pain received great reviews in local entertainment magazines and also received significant airplay on the local college radio station, CJSR FM 88.5 where the release appeared on their Top 50 Chart. The single 'Lament for Lester Cousins' also appears on Edmonton Reproduce, a 21 - band compilation album distributed by Green Pepper Records. Three years later the Corb Lund Band has recorded a full length CD titled Unforgiving Mistress. Unforgiving Mistress features 11 songs wriffen by Corby Lund. The band is also currently working on their first video for the single 'We Used to Ride 'Em'.

Corby Lund, guitar player and vocalist for the Corb Lund Band, writes all of the band's material. Corby has been playing professionally for ten years where he has toured with Western Canada's largest independent alternative band, the smalls. Corby has recorded four full length CDs with the smalls, sold over 30,000 albums and has toured all over Canada, in the U.S. and in Europe.

Corby's music gives the style of a younger and maybe darker point of view than most contemporary country songwriter's today. His music is influenced by his experiences riding horseback, chasing caffle and rodeoing in Southern Alberta and living on the family farm and ranches near Taber, Cardston and Rosemary where he grew up. Coming from three generations of ranchers and cowboys, Corby left his hometown of Taber, Alberta and moved to Edmonton where he affended Grant MacEwan Performing Arts School to study jazz guitar and bass. He then affended the University of Alberta where he finished half of a history degree only to leave prematurely to hit the road playing music.

Kurt Ciesla, raised in Lethbridge, Alberta, is the electric and stand up bass player for the Corb Lund Band. He is a former member of Blue Locutus and is a familiar and respected musician in the Edmonton Jazz music scene.

Ryan Vikedal, raised in Brooks, Alberta, plays the drums for the Corb Lund Band. Ryan is a member of the popular Vancouver rock band, Nickeback and has toured extensively across Canada. Ryan has also played and recorded with the likes of The Piemyn and Edmonton's based flink band, The Craft.

The Corb Lund Band has a strong and loyal grass roots following in Edmonton where they play to sold out crowds in various venues across town. The Corb Lund Band has gigged in and around the members' other musical projects and have toured mainly in Alberta and Vancouver. Recently the Corh Lund Band headlined for an audience of over 300 at Edmonton's premier alternative venue, the Rev Cabaret and opened for Juno Award winner Fred Eaglesmith. The Corb Lund Band also performed at the 1997 North Country Fair with two very well affended concerts. In addition, the band was featured at last year's New Music West showcase in Vancouver with headlining act and Blood Shot recording artist, Neko Case.

The Corb Lund Band has made two guest performances on Edmonton's Independent Television Station, the 'A-Channel' and was also featured on two occasions on the province wide program Radio Mondo hosted by Lark Clark. 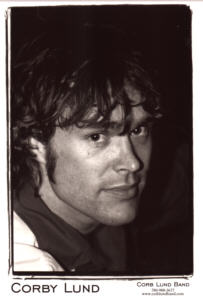 Lund - who pefforms Friday at the Republik - was part of the Alberta rodeo circuit for years before moving north to become punk rock star. His parents still live on the family farm near Taber.

For the past decade, however, Lund has played bass for the Smalls, one of Edmonton's most successful independent rock bands and a popular draw at Cal- gary clubs like the Republik and the Night Gallery.

He began the Corb Lund Band in 1994 as a way to play acoustic country songs that didn't fit into the Smalls repertoire.

Now the country trio - Lund, drummer Ryan Vikedal (who also drums in Vancouver rock band Nickel- back) and fiddle-player Kurt Ciesla - is riding high on the release of its fIrst CD, Unforgiving Mistress.

"I grew up with this kind of music. I started playing it just for fun," says Lund, 29. "It's kind of low intensity. I'm into it fully, but I just do it in the cracks around the Smalls."

A follow-up to a cassette recording that he released a few years ago, Un forgiving Mistress is "pretty naked music," a rootsy-country blend of tunes that owes plenty to "the old guys from the '705" like Waylon Jennings, Wrnie Nelson, Johnny Cash and Kris
Kristofferson, says Lund.

It's the sort of music that even his parents enjoy hearing, he says.

"When I was in my mid-teens, I got into rock and metal and stuff. It was pretty fun, but I think it was pretty alienating to my parents. They've al ways been pretty supportive. to their credit, but I don't think they really un derstood rock music," he says.

"But now that I'm doing this, it's like the light's come on. They come out to the shows and they're excited about the record. They're really into it."

Lund may live in the big city now, but the country lifestyle has always been part of his life. His mother, a barrel racer, and his father, a bronc rider and steer wrestler, have competed in professional rodeo events around the world.

In fact, he and his father - now a western artist whose paintings have been on view at the Glenbow Museum - both competed at the Calgary Stampede in 1981. His father placed second overall, while the younger Lund came in third in steer riding.

Lund knows his family's exploits are the stuff of country music. In fact, he recently finished putting together a video of We Used to Ride 'em, a song he wrote about his father's retirement from the pro rodeo circuit.

"I found all this funky Super 8 (film) footage of my dad and his friends rid ing in the early '70s,"he says. "It's pretty neat. We used a bunch of it in the video."

For now, Lund has no plans to give up his hard rock life with the Smalls to pursue the country circuit full-time.

But he admits that he's more likely to be cranking out country ballads than thrashing in a punk band in 20 years.

"I really like doing the Smalls stuff. It's a totally different trip," he says.

"But I plan to be doing this kind of music, to be playing country probably for the rest of my life." 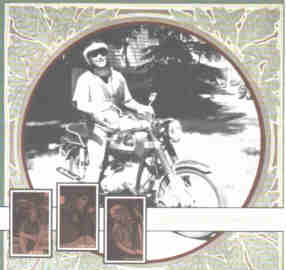 What people are saying...

"The Corb Lund Band's set was tight, groovy and snare-heavy in a good way, with some real toe-tappin finger snappin' hooks."

"We liked you so much that we want to get remarried and have you play at our wedding."

""Modern Pain "features some truly toe-tapping material penned by Lund and played magnificently by the band. Lund's voice is sweet and smooth"

What Corby has to say.

on playing both heavy rock and country music:

"ft's kind of like playing hockey and football. Kind of different, but kind of the same. More the same than most people think Just shifting gears."

"J want to make it clear that the fact J do this music too doesn't indicate in any way that J'm dissatisfied playing with the Smalls. ft's a totally diferent thing, it's like the difference between painting with oils and doing pen-and- ink sketches... Heavy rock is kind of about aggression and acoustic music is more like introspective, so for me it's different side of my personality coming out. As a musician, it's not as far apart as people think - it'sjust different moods being expressed."

"J started the Corb Lund Band cause J wanted to learn to sing in public and I love that style ofmusic. Ijust wanted to play that style ofmusic, simple as that. Both bands (Corb Lund Band and the smalls) are different but I love them both. ft's been pretty neat because the Corb Lund Band has been allowed to grow very slowly because I can only do it now and then, the other guys as well. So we come out of the woodwork every six months or so and play a show and write some new songs, but it's not forced We 're able to let it mature in a natural way and people seem to dig it too. We play so infrequently that when we do play people are happy to see it and they come out to the shows."

"Some people say that you shouldn 't care about what the audience thinks, but I disagree with that. Music is like a language, a good show is like a meaningful conversation. Ifyou 're playing all the time no matter how good it is, if nobody is getting it then it's a waste of time. I don't enjoy playing music for myself the payoff for me is the communication between me and the audience."