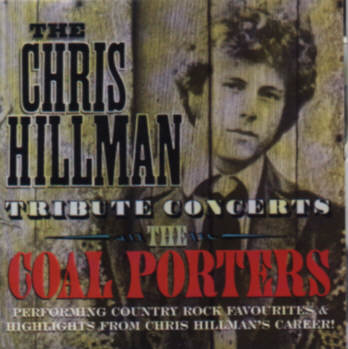    First album in three years from The Coal Porters, now based in London, England. Produced by Sid Griffin
and recorded live during concerts in London, Nashville, Louisville and New York City

We love this one.  The Coal Porters have gathered up a bunch of tunes that Hillman has done over the years
and presented them in a live setting.  The result is one great song after another.  Hillman has been the quiet giant
in country and rock in his nearly forty year career.  He's been there for the whole ride and he's had
success at every bend in the path.  This disc is more than a tribute, it's a musical statement that
shines the spotlight in the right direction.
(Village Records)

It's no surprise that Sid Griffin (Western Electric, Long Ryders,
quintessential country-rock writer and enthusiast) has a deep
appreciation for the musical legacy of Chris Hillman. Hillman's
musical and songwriting talents have played key rolls in many of the
bands that influenced Mr. Griffin. From an impressive list that reads
through The Hillmen, The Byrds, The Flying Burrito Brothers,
Stephen Stills' Manassas, and The Desert Rose Band, The Coal
Porters have stoked this collection of live recordings with highlights
from all of the aforementioned groups. With Mr. Griffin on mandolin,
he is well accompanied by Pat McGarvey on banjo and Neil Robert
Herd on guitar and collectively they craft a chillingly sweet vocal
union that takes you back a few eras. In addition, there are guest
players on dobro, fiddle, double bass and pennywhistle to provide
additional colour to these fine performances. UK Import
(Miles of Music) 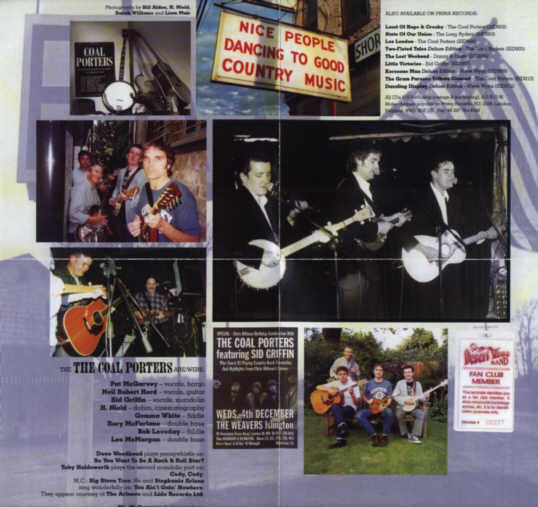 Other Projects:
Go for further details to:
sidgriffin.com

Western Electric -Western Electric (MRCD 199)
The debut album which made several publications Album Of The Year listings for 2000.Traditional roots rock played with the latest technology, it sounds like Wilco songs played by Portishead. Billboard (USA) called this "...Griffin's best, most assured, most experimental and ambitious work by a long shot" Mojo (UK) declared this Alt-Country Album of the Month for June, 2000.The European release is on Munich Records but in Germany it is on Glitterhouse Records (GRCD 485) and in the USA Western Electric appear on Gadfly Records (Gadfly 261).

Little Victories - Sid Griffin (SID007)
An acoustic affair featuring eight Sid originals and four covers, including his duets with Billy Bragg on an unreleased Phil Ochs' ballad Sailors & Soldiers and with Steve Wynn on their classic The Rate Of Exchange.

The Lost Weekend - Danny & Dusty (SID006)
The only album by the Paisley Underground supergroup featuring Green On Red, Long Ryders and Dream Syndicate members on CD for the first time and featuring a bonus track.

Two-Fisted Tales Deluxe Edition -The Long Ryders (SID005)
The final studio album from the Long Ryders now with four bonus tracks, rare photos, complete lyrics and liner notes by drummer Greg Sowders. Considered by many, many fans to be the band's best album.

State Of Our Union - The Long Ryders (SID003)
The number one USA alternative chart classic featuring Looking For Lewis & Clark and now with four bonus cuts.