BETWEEN THE DEVIL AND THE DEEP BLUE SEA 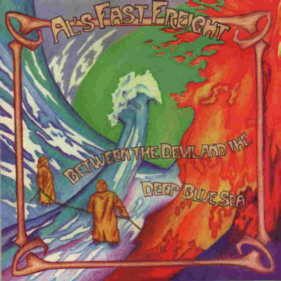 1.1 Need A Word That Rhymes With Idiot
2. Life Of The Party
3. Who The Hell Knows
4. Between The Devil And The Deep Blue Sea
5. You Don't Want Me Around
6. Ring In My Pocket
7. Heartburn
8. Safe In My Arms
9. Hollywood Be Thy Name

Produced and engineered by Byron Nemeth at Pacifica Studios

Whatever you call it, the increasing popularity of this genre is welcomed news to Al's Fast Freight who has already been filling clubs with the sound for several years. Thanks to the efforts of Son Volt, Wilco, BRS-49, Steve Earle, and many others, country music thrill seekers are finding new places to turn.

Al's Fast Freight has crossed the line between rock and country, and is now gaining acceptance in both formats with their own brand of insurgent country/original Americana songwriting. MAIA RECORDS has released "Between the Devil and the Deep Blue Sea", a follow-up to their CD "1-90". Al's Fast Freight's versatility has landed them opening slots for a wide array of national performers ranging from classic rockers, to modern bands just arriving on the scene along with some of country music's finest. In the past they have opened for the Outlaws, Dave Mason, Jorma Kaukonen, Simon Townsend, Little Feat and Rare Earth as well as for modern rockers such as Letters to Cleo, Possum Dixon, Peter Himmelman, and the Why Store. They have also appeared with country acts Tracy Byrd and David Allen Coe and Americana acts Whiskeytown, the Ranch, V-Roys, Freakwater, Richard Buckner, Jack Ingram, Blue Mountain, and Mary Cutrifellow.

"If Al's Fast Freight lived in your town, you'd go see them every time they played, the tip jar stuffed, and their bar band originals would always entice another dance. Those twangy truck boys sure can write some great stuff, and there's a number of 'em found here ("Red Neck, White Trash, Blue Collar," "Interstate 90"). When they get tired of honky-tonkin', they switch to a jazzy R&B number ("Late Night Visit") or a cool pop-gospel ("Who'll Save Me Now") to sedate the beer-bottle-eating crowd." DIRTY LINEN 11/98 "High, lonesome vocals, loose, live, somewhat sloppy performance. Downright electric" SCENE 8/7/97
a heartfelt picture of a modern outlaw with ringing guitar" FREE TIMES 7/97
"appeals to kids who grew up with their parents' Dylan albums" BLUESUEDE NEWS #411998

"Has a loose, relaxed feel that is easy to like and it is a worthy follow-up to the well received
INTERSTATE 90 album" CLEVELAND COUNTRY MAGAZINE 5/99

Anna Nausea AM I ANNOYING YET? (1993 Sound Of The Sea SOS-5 CD) -Al's Fast Freight
members provide backing on many tracks.