"WacoWorld"
We have seen the future of insurgent country. ..and it ain't pretty! 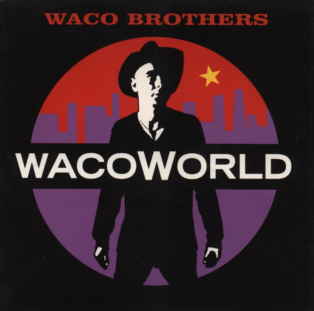 Dateline 1999: With Nashville still cranking out a clanking heap of over-produced android drek (belly button bimbos, hick hunks in hats, computer-corrected-Crisco-on-the-Iens-"Glamour Shot" vocals, a gratuitous fiddle or mandolin fill dropped in here and there to "make it country"), and with "AIt.Country" flinging a stink on Western Wear like the rise of and fall of "grunge" forever tainted the flannel shirt -- it's high time for a new living, breathing, puking animal. We need real-live, hulking honky-skronk with heart -- and we need it now. Enter Waco Wodd -- the new CD from Chicago's Waco Brothers.

As the hardest-working (and hardest-drinking) band in insurgent country, The Waco Brothers return to the fray with a righteous attitude and a slew of aces up their fringed sleeves. This rabid Country Bear Jamboree (Jon Langford [Mekons, Skull Orchard], Deano, Steve Goulding [Mekons, Poi Dog Pondering, Graham Parker's Rumour], Alan Doughty [Jesus Jones, Skull Orchard], Tracy Dear [World's Greatest Living Englishman], and Mark Durante [KMFDM]) makes good on the Clash meets Cash promise of their three previous Bloodshot Records releasws (To the Last Dead Cowboy, Cowboy in Flames, and Do You Think About Me?) -- and gnaws the heads off unsuspecting ~ music poseurs in the process -- leaving them torn and twitching in the dirt.

Waco World kicks out over a dozen brand-new whiskey-fueled anthems and features the crusading work of converts Rick "Cookin" Sherry (Devil in a Woodpile) on washboard, Kelly Hogan (Rock*A*Teens, Jody Grind) on vocals, John Rice (Pine Valley Cosmonauts) on fiddle, and the Poi Dog Pondering horn section. Consider this record a glimpse into the future of insurgent country, if you will -- as the genre continues to define itself and grow into something big enough to contain the seemingly disparate influences referenced here on Waco Wofid: Mick and Keef, Hank Williams, Jimmy Cliff, and Morphine -- to name a few. The insurgent spirit is there, folks. It's time to open a bottle and open your mind -- and skronk like it's 1 999. Because it is, son! It is.


HOW FIRM A FOUNDATION
A few words about the Waco Brothers' first few...

*To The Last Dead Cowboy

"The Wacos Brothers play 'hard country,' which seems to mean country rock without the slightest influence from the Eagles." Chades M. Young PLAYBOY

"...the Wacos are in it purely for the kicks, and, by avoiding most contemporary indie rockers schticky take on country, they've produced th~ perfect record for Saturday night's PBR party." Jason Ferguson
ALTERNATIVE PRESS

".. the Wacos are capable of music more sincere and moving than they'll ever get credit for.. a heartbreaker like "If You Don't Change Your Mindu has the makings of a honky-tonk classic." Dusty Miller OPTION

"...the Waco Brothers are a brilliant band whose sound is possessed by the demon of rock'n'roII, haunted by the ghosts of old country music, and soaked soul-deep in the blues." Paul Verna BILLBOARD

"...Langford sounds as if he were Joe Strummer leading the Clash on a race through the Hank Williams songbook." Geoffrey Himes WASHINGTON POST

"They outdo themselves on the follow-up, Cowboy in Flames.. .in which the band gleefully cannibalize country's history and wring passion out of it's faded myths." Dan Booth BOSTON PHOENIX


*Do You Think About Me?

"Waco Brothers.. play an anarchic, politically aware version of honky-tonk, where the beer is spiked with the tears of the working class, the whiskey poured on the rocks of failed dreams." Steve Mirkin ENTERTAINMENT WEEKLY

Real Life Rock Top Ten, #6: Waco Brothers "Revolution Blues," on Do You Think About Me? In on Neil Young's On the Beach this Manson Family manifesto was lumbering, sardonic, even smug. with the sound of time running out matching Jon Langford's race through scattered images of buggy attack squadrons and dead dogs on million-dollar lawns, the reach for the end of the world music suggests a Waco Brothers not credited here: David Koresh." Greil Marcus ARTFORUM 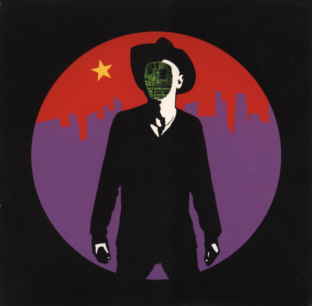