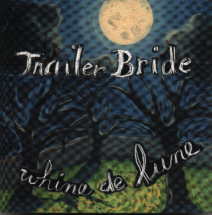 What is it about the deep South that renders its residents just a little. ..touched in the head? Is it the constant feel of gauzy cotton clinging to sweaty skin? The way the kudzu buries the rusting hulks of abandoned cars by the roadside? Or is it just an obsession with a sordid past that calls up so many ghosts? We don't know why Dixie seems so daumed haunted, and we can't explain exactly why music from below the Mason-Dixon makes your nape hairs stand up and wiggle. All we know is Robert Johnson and the Devil sure didn't meet at no crossroads in Terre Haute.

The eleven Swingle-penned originals on "Whine de Lune" unfold with the sick gothic grandeur of a Flannery O'Connor collection.
Tunes like 'Work on the Railroad" and "Dirt Nap" spin hard-luck stories of pretty gals gone to seed who take on death like they're biting into an overripe peach. And if one of the dancers at Trailer Bride's "Clermont Hotel" was eyeballing you, believe me--you'd best drop your beer and run. Remember, she may have a sweet smile and a voice like blackberry syrup, but she just might have her last lover buried under the back porch steps.

Trailer Bride have been charming their way into Bloodshot's black little heart since acclaimed 1998 release, "Smelling Salts". They put the sex in "Sex Beat" on Alejandro Escovedo's "Bourbonitis Blues", and later on this year they'll provide the "Poor Little
Critter in the Road" on our upcoming Knitters tribute "Poor Little Knitter in the Road" (look for that one in early October).

Like a corn liquor-fueled version of Velvet Underground led by aslurring and purring Blanche DuBois--or a bunch of slirdyky-tuff pineywoods blues punks on drums, lap steel and stand-up bass with Melissa Swingle wailing and sassing like a femme fatale
Lightnin' Hopkins out front--Trailer Bride are pure Dixie--creepy and cool.

We're Earnest, and Contagious:
How grunge killed alternative country, and why Trailer Bride could save it
by Glen Hirshberg


In the heart of the bean of country, the worm continues to feed. Elsewhere m the diaspora of fin-de-siécle American pop, the survivors of the grange apocalypse have begun to gamer and bunt. Some huddle together m desperately defined niches (dum'n' bass, alternative, post-rock), True Believers clinging to self-imposed structural guidelines an a substitute for inspiration. A brave few strike out on wild, personal paths, disappearing into unebaeted musteal somewberes of aekuown habitability and promise.

But in the backwaters of the nation's rural-aspiring youth, the plague that grange iraleashed runs rampant. They wield electric guitars and edgier tempos than traditional country musicians. They espouse a kinship with Patsy Cline and Rank Sr. that the NankinlIe establisbinent has supposedly abandoned And ahoost all of suffer from a crippling self-awareness that strangles much ofthe music before it toikes its first breath.

Not until I heard Smelling Salts, the second CD from North Carolina's Trailer Bride, though, did I understand what I'd been misning all this time: The problem with Tod Snider, Whiskeytown, Wayne "The Train" Hancock, alrnost every insurgent country artist, is that they're not scared enough.

...[W]hat makes Patsy Cline's "Walking" so haunting, even now, is the sense that the singer believes she may not get back Hank Williams' drawling declaration that "There'll be no teerdrops tonighf" holds no promises about tomorrow nig'ht. In country music, even more than in most pop forms, the loss of the lover (or drinking habit, or car, or faith, or homegrown tomatoes) has ta hurt. Otherwise, what possible excuse is there for all that whimpering?

Even before singer Melissa Swingle opens ber mouth, Trailer Bride sounds fresher, stranger, more contemporary than vitmally all its contemporaries. "Wildness" bucks and kicks on a barely controlled slide-guitar line and upbeat-driven rhythm, while "Graveyard," which is about walking in one, glides on a bluesy whisper of a riff, mustering so much quiet menace that it could almost pass for goth, except for its guilelessness.

But Swingle is the key Her lyrics involve moonlight, beatings and buzzards, an well an the de rigeur jealous lovers and lost souls. Her voice is throaty like Patsy's, but her delivery is closer to Hank's, all flat expressionlessness that doesn't mask the yearning -- for love, self peace, God. She can sing about abusive relationships and sound like a survivor, and she can sing about wanting to save her songs for the front porch and sound scared to death. In "Porch Song," the narrator's mother admonishes, "That's a pretty good song, but you oughtta be singing for Jesus." The singer responds, I know I should, someday I just might/hope Jesus will forgive me toinght," and in that moment, mischievous playfulness, fear of death, hunger for sex and love of music tangle together into the sort of gloriously complicated epiphany l'd forgorten country music could manage.

Whether the emergence of Traller Bride signals a way out for No Depression-style music or simply the arrival of a blazing and singular talent remains to be seen. Regardless, Smelling Salts serves an a startling reminder that archness is not necessarily a sign of intelligence, that getting the joke can deny you wonder, that getting found might get you saved, but getting scared can get you art.