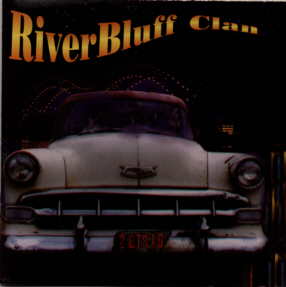 Discography: Two Quarts Low, 1998
(Recorded at Ardent Studios and produced by Jeff Powell)
One Night in a Month ofSundays, 1996
(Recorded live at The Poplar Lounge)
Memphis: Am 't Like Jt Used To Be, 1996
(Compilation recording includes "Making Me Old")

It may seem like an episode of The Twilight Zone, where the Beatles pick bluegrass, Johnny Cash croons R&B, and James Brown has gone country. This parallel universe is a reality, however, when the Riverbiuff Clan hits the stage.

This versatile group--recently named Premier Band by the Memphis chapter of the National Academy of Recording Arts & Sciences for the second consecutive year--knows no boundaries when it comes to musical styles. Influences range from Bill Monroe and Allison Krauss to the Eagles and Gram Parsons.

In addition to its unique take on classic hits from nearly every musical genre; Riverbiuff Clan performs a diverse range of original songs, "including several would-be huge country hits in a perfect world." (The Commercial Appeal)

The band's second CD, "Two Quarts Low," was released July 9, 1998. Produced by Jeff Powell and recorded at Ardent Studios, "Two Quarts Low" is the first release by Fat Chance Records, a new label established in partnership with local businessman Ronny Russell. In addition to the title track, songs on the new CD include "The Walls of Graceland," :'Outside Looking In," "I Won't Breathe," "Goldmine," "Everything Under the Sun" and "Honeysuckle and Kudzu."

Recorded live at Memphis' Poplar Lounge, the band's debut CD release, "One Night in a Month of Sundays," combines traditional bluegrass with country and rock. Classifying the group's one-of-a-kind technique as "hybrid vigor," The Memphis Flyer notes that "The Riverbluff Clan's odd pairings of songs and styles are precisely what sets this CD.apart from stan~lard fare."

Burroughs made names for themselves in the late '80s, when Jimmy Davis & Junction scored a hit single and video with "Kick the Wall."

Today's version of the Riverbluff Clan is a revival of the original band formed in the mid-1970s. Even then, during the heyday of disco, the group was the hottest on the Memphis scene while also taking the act across the country and around the world on the DOD tour. After disbanding in the mid-1980s to vursue divergent interests, the band reunited in 1995 by popular request, this time with Davis on board to jam with his teenage idols.

Though the Riverblutf~Clan "can cover just about any song and make it their own" (The Commercial Appeal), the band's original music is blazing the path to its recent and fliture success. Burroughs, Davis and Ford are all accomplished songwriters who have written or co-written~ songs for several prominent artists (e.g. "Keeping My Distance" on Martina McBride's latest CD, "Evolution;" "Red Blue, Jeans" by John Kilzer; and "Blame It On Love" by Restless Heart.)

The past year has proved momentous for the band. The kiverbluff Clan is currently touring the country with Nashville recording artist Mark Collie and has been featured several times on The Nashville Network. The highlight was Mark Collie's Celebrity Race for Diabetes Cure, when the group played with such country music artists as Loretta Lynn, Crystal Gayle, Kim Richey, Anita Cochran and Billy Ray Cyrus. Alpng with Collie, RBC recently performed in Zurich, Switzerland, as part of the International Country & Western Festival. The band's success last year led to an endorsement by Peavey Electronics, which will supply the band's musical equipment needs.

While the popularity of "Alternative Country" or "Americana" music is growing rapidly, the Riverbluff Clan has already established a niche in this field with its unique mixture of various musical styles. Sit back and listen. You are about to enter another dimension. ..m music.

"The RiverBluff Clan has at last arrived--not as players or songwriters, things they've long mastered--but as a band. Their new album finds the quirky quintet exploring the connections between bluegrass, country and roots rock without forcing the point home. Thi~ is a record of natural strengths and fine4uned ensemble work that feels at ease with itself." The Commercial Appeal

"A tightly produced, slick package of country-tinged rock-and-roll that could easily find a coveted spot on pop and country stations like FM 100 or KIX 106 if radio programmers weren't such a cowardly and unimaginative lot." Memphis F~yer

"The result is a tight and enjoyable mix with a few tunes tailor-made for country radio."
Dateline Memphis

Kudos for One Night In A Month of Sundays

"Anyone who has ever heard the Riverblutf Clan do Queen's Fat Bottomed Girls knows they can coverjust about any song and make it their own. On this disc, they jump genres like jumping trains, moving from the traditional fiddle tune Sally Goodin to the AIlman Brothers' MidnightRider to an Orange Blossom Special in which Davis screams like James Brown. The finest tunes, however, are those written by Davis, including several that would be huge country hits in a perfect world." The Commercial Appeal

"The Riverbiuff Clan's odd pairing of songs and styles are precisely what sets this CD apart from standard fare." Memphis Flyer

"The Riverbluff Clan, comprised of some of the city's finest players of everything from country to mainstream roots-rock (Jimmy Davis and Tommy Bufroughs just to name' a couple), is more thatjust a bunch of guys with a casual interest in bluegrass as a sideline; they actually have a serious reverence for the style Bill Monroe fathered. They're tight without being boring." BlueSpeak