Various Arists in a nod to The Knitters:
"POOR LITTLE KNITTER ON THE ROAD" 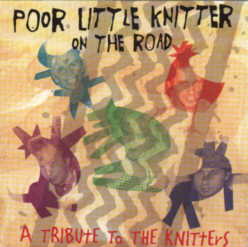 Remember being a snotty little punk rocker in the early and mid-Eighties? Remember thinking that anything recorded more than four months ago was old, irrelevant fluff ready for the scrap heap? Remember thinking that music was worthless unless it was angry, political, and LOUD? Remember thinking that anyone knowing anything about country music, let alone playing it, was a worthy object of a dismissive sniff down your safety pin-punctured nostrils? Well even if you didn't, the Bloodshot Brain Trust were among these foolish young'uns. Then, luckily, we discovered The Knitters.

The Knitters were a loose side project of indie rock icons (DAVE ALVIN of the Blasters, JOHN DOE, EXENE CERVENKA and D.J. Bonebrake of X, JOHNNY RAY BARTEL who has hit the bass for the Red Devils and Mike Ness) who dared to love country music in the early-Eighties, who drew a line in the punk sand and said that it was OK to cross it, and who opened all our ears to the fact that loving country and loving punk at the same time was not nearly as crazy as it sounds. Much like our own beloved Waco Brothers, they began with now legendary live shows where their drunken energy and affection for the music made believers out of all who listened. And when they released their one album, "Poor Little Critter on the Road," on Slash in 1985, The Knitters left a deep impression on the dewy mohawks of the future Bloodshot clan.

The Knitters' first and only album was a BIG reason we at Bloodshot threw caution to the wind and started pumping out insurgent country five years ago. And without Bloodshot, well, you know... Without being bashful, let's say the lineage between the band and label provided a plenty historic outcome for roots rock fans everywhere. The artists on this album also acknowledge a direct debt to the Knitters.

The Knitters THEMSELVES are rearing their five colorful heads. Member John Doe joined the Old 97's for a track and the album features a LOST Knitters track. Is it obvious we're plenty excited by this album? You guessed right. Check the flip side of this sheet for a complete list of contributors.


Please contact Nan at Bloodshot <nan@bloodshotrecords.com> or the good folks at Autotonic 888-551-3613 <radio@autotonic.com> for your entire Knitters needs.

Here's a handy little cheat sheet of Knitters contributors on "Poor Little Knitter In The Road":

Kelly Hogan & The Rock*A*Teens . Kelly Hogan, a former member of the Rock*A*Teens and
The Jody Grind, is preparing her next record with the Pine Valley Cosmonauts, set for a Winter
2000 release on Bloodshot. "Golden Time," the Rock*A*Teens~ recent album, was released earlier
this year on Merge.

The Sadies w/ Catherine Irwin . The Sadies have backed Bloodshot artist Neko Case, and, most recently, R&B wildman Andre Williams on Bloodshot's "Red Dirt." Their second CD, "Pure Diamond Gold," was released in September on Bloodshot. Catherine Irwin is known to all as half of the vocal team fronting Freakwater, whose latest CD, "End Time," is set for a fall '99 release on Thrill Jockey.

Ground Speed w/ Nora O'Connor . A first-time recording for these Chicagoans featuring a former member of Moonshine Willy on banjo, and the dulcet vocal tones of Lawrence Peters. Nora is a vocalist/guitarist witli The Blacks.

The Blacks . Glam country rockers The Blacks released their debut CD, "Dolly Horrorshow," to' critical acclaim on Bloodshot in fall of '98 with Roscoe Ambel producing. Their second CD is due in spring of 2000.

Old 97's w/ John Doe · Old 97's second release for Elektra, "Fight Songs," was released in spring' '99. In their indie days, Bloodshot released their second CD, "Wreck Your Life," in fall of '95. John Doe, of course, was a member of X and The Knitters before embarking on a successful solo career.

Anna Fermin & Friends · Anna Fermin's Trigger Gospel self-released their debut CD "Things to Come" this spring and it's already been hailed as excellent by critics nationwide. Playing guitar on this track is Robbie Fulks, and Jon Rauhouse of the Grievous Angels plays pedal steel.

The Handsome Family . Frequent contributors to Bloodshot compilations, the droll backwood duo's fourth CD for Carrot Top Records is due this fall.

99 Tales · This is the' first release for this band from Sacramento, CA, who opened for The Knitters over a decade ago.