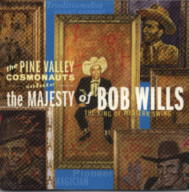 Join The Pine Valley Cosmonauts as they erect a more-than-worthy monument to one of the most versatile and beloved figures in American music -- the late, great BOB WILLS. These 19 tunes show the breadth of his musical magic -- from western swing to jazz, country & western, honky-tonk blues, and beyond.

Here's the kicker: joining the PVC's (in their effort to canonize unsung country & western heroes by releasing tribute albums with cumbersome titles) is a star-studded cast of guest vocalists -- a powerhouse line-up featuring JIMMIE DALE GILMORE, ALEJANDRO ESCOVEDO, ROBBIE FULKS, SALLY TIMMS, NEKO CASE, EDITH FROST and other greats and near-greats. See the complete line-up/stats above of this tract. You won't believe your eyes OR your ears.

The "Bob Wills Record" also serves as a visual salute to this Texas legend: in addition to his musical services, Jon Langford also provided the artwork for the CD and the limited-edition double-LP vinyl release of this project. This is a testament reverential in attitude and chutzpah. It's a heartfelt tip of the Stetson to an insurgent icon who wasn't afraid to turn country music on its ear -- and turn it into something truly great. And it's FUN, folks -- pure fun -- western-style!  Ahhh-Haaaaaaaaa!


You can't tell the players without a program!

1. CHRIS MILLS Chicago-based youthful troubadour, fresh from the release of      his 2nd Sugar Free Records CD Every Night Fight for Your Life.

2. JIMMIE DALE GILMORE A legend in Texas and the universe. The Flatlanders. That's all there is to say, my brother.

7. JANE BAXTER-MILLER Whiskey and honey-voiced leader of the Texas Rubies -- they graced our Insurgent Country Vol. 1. Chicago's own thrush crush.

10.DEAN SCHLABOWSKE Guitar slinger/vocalist, and half of the American presence in the Waco Brothers.

12.BRETT SPARKS Husband half of The Handsome Family -- who haunted two Bloodshot compilations (For a Life of Sin and Straight Out of Boone Country) and released their latest spooky-beautiful CD Through the Trees this year on Carrot Top Records.

14.TRACEY DEAR "The Greatest Living Englishman" spends his nights as the mandolinist for The Waco Brothers.

15.NEKO CASE Pure country sass and spunk. The only broad with a pulse at Lilith Fair. Her flawless CD The Virginian was released on Bloodshot Records earlier this year. Look for her to tangle with Wishkeytown on a split single in October '98.

16.EDITH FROST Chain-smoking cowgirl chanteuse. Her Drag City Records CD Calling Over Time wowed the people in the know. And the regular folks too.