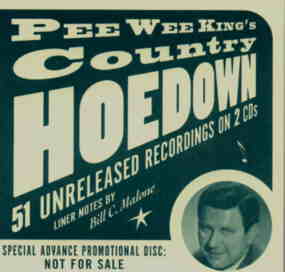 They say the accordion player is a lonely man. We at Bloodshot say the accordion player is a rebel, an individualist, a man who stands out from the crowd. Pee Wee King was just such a man. This kid from Milwaukee made it all the way to the Country Music Hall of Fame on a squeezebox and a dream, and along the way wrote some of the pleasing-est country-pop hits in the musical canon.

Now Bloodshot Revival and Soundies are proud to present the only available collection of music from PEE WEE KING and His Golden West Cowboys. This *TWO-CD set of previously unreleased material includes ALL 51 of the tunes Pee Wee, Redd Stewart and their gang cut for Standard Transcription Service in 1 952, lovingly rernastered for your listening pleasure . Included is an unissued version of the 1951 #1 country/pop crossover hits "Slowpoke," plus dozens of other country, western and pop numbers that'll have you scratching your head wondering why this remarkable performer's work has been long out of print *THE PROMO/N YOUR HANDS IS ONLY CD #1.

Pee Wee King was born in Milwaukee and played the accordion at 14, but he played pure country, not the Beer Barrel Polka. He was a member of the Grand Ole Opry, where he introduced the amplifier and drums to that revered stage. Setting up shop in Louisville instead of Nashville, Pee Wee led a Western Swing band in an era dominated by honky-tonk. He penned huge pop crossover hits like "Tennessee Waltz" and "Slow Poke," and over 400 other tunes.

King enjoyed a long and varied career as an instrumentalist, bandleader, actor, and businessman. Read all about it in the extensive liner notes by Bill Malone, author of Country Music U.S.A. and dean of country historians. Along with exclusive camp-classic artwork from Pee Wee's self-produced film of the same name, "Country Hoedown" finally gives this unsung country legend his due.

Chicago-based Bloodshot Records has built an enviable reputation as a prime source for "insurgent country" releases by the Waco Brothers, Neko Case, and Alejandro Escovedo (even unpredictable R&B veteran Andre Williams recently waxed a country album for
the firm). Now Bloodshot is delving into the reissue field with a series of releases as distinctive as their critically acclaimed contemporary output.

The newly inaugurated Bloodshot Revival subsidiary, in partnership with the Soundies imprint, has begun mining a cache of vintage country material culled from a vast library of commercially unreleased radio transcription discs dating from the 1930s, '40s; and '50s. The first three CDs in the series--singing cowboy Rex Allen's "The Last of the Great Singing Cowboys," Western swing bandleader Spade Cooley's "Shame On You," and country legend Hank Thompson's "Hank World" have been remastered direct from transcription lacquers that were originally intended for radio airplay only and sound terrific.

"Kevin Parks, he runs a label of his own out of Chicago called Soundies," says Bloodshot president and co4ounder Rob Miller. "He came in contact with this old engineer in Colorado who was sitting on thousands of hours of 16-inch acetates that he recorded over the years, transcription stuff mostly standard and National transcriptions. (Parks) found all the country and western stuff in there, and he contacted me to see if we'd be interested in doing some sort of partnership, based on our profile and our distribution and our theoreUcal capabilities at promoting stuff.

"There's just so much stuff that we're sort of like kids with a big box of candy. We're trying not to jam it in our month all at once. We're trying really hard to pace ourselves and release one every couple of months," says Miller, who cites Parks' extensive historical knowledge of the transcriptions as integral to the series' success. Upcoming projects from the same fertile source include sets by Ernest Tubb (who recorded extensively for World Broadcasting System during the mid-'40s), an early '50s set by accordionist Pee Wee King, and a late '30s collection by the Sons of the Pioneers.

Response so far has been positive. "Our regular fan base has responded really well to it," says Miller. "They're willing to take a chance at it. A lot of the people who are into the more punk-inflected stuff have no idea who these people are, but they're giving it a shot."

Thompson seems delighted, if a tad taken aback, about the emergence of hi& latest reissue. "I've got copies\ of 'em at home. But gosh, I hadn't heard those things in I don't even remember 40-some-odd years," he says. "So I was kind of surprised to know that somebody was interested in it."

Fans of vintage country are certain to share his interest.