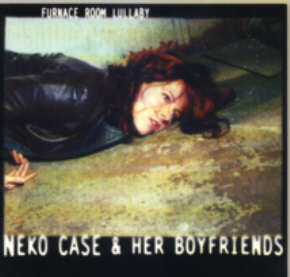 You always think this love thing will get easier, don't you? You always think that THIS time you'll get it all figured out; the process will become clear, the hazards marked, the dangers well-known, and the mistakes will not be repeated. You've been through the rebound relationships, you've gotten "in touch with yourself," you've gotten to "a good place," you no longer feel like you're falling down an endless elevator shaft, your dazzling array of visible twitches has subsided; your personal grooming habits are back to the level of societal acceptance, and you've worked through your binge drinking, self-loathing, and the spastic outbursts of sporadic violence directed at your kitchen table. Now you're prepared to enter the fray again, aren't you? It'll be different this time, right?

Neko Case & Her Boyfriends are here to tell you that you're a damn fool. Love is a brutal and nasty mess. It doesn't get any easier. It doesn't get any better. It doesn't get any fairer. It doesn't get any less bloody. It doesn't make any more sense. It's always holding some diabolical new hell to toss your way. It'll chew you up, spit you out, and laugh until its sides hurt. Why? Because it knows you're powerless to resist its fecund charms. Despite the scars and the bruises, no matter how many times you've been left for dead, face down in a stagnant pool of your own regret, you'll be back for more. Again and again.

"Furnace Room Lullaby" is a testimonial to the whole maddening, irresistible struggle, as told in twelve original songs written for all you scrappers who've fought the fight and lost, stitched your hearts up with rusty needles, and jumped right back in for another round. Backed by her case of Boyfriends, including folks like RON SEXSMITH, BRIAN CONNELLY (Shadowy Men on a Shadowy Planet), BOB EGAN (ex-Freakwater), DALLAS and TRAVIS GOOD (The Sadies), and EVAN JOHNS, Neko takes you through the sometimes desolate and resigned, sometimes pissed off; and sometimes haunting and harrowing Carnival Ride of Love that's doing its best to make gibbering, addled casualties out of all of us. And then there's the voice-part doe-eyed Brenda Lee on a cabaret jag, all vulnerable and on that sad fourth scotch and soda, part bummer pop grandeur, and part honky-tonk wolverin - ready to boot you in the head if you get too close to the stage or dis Loretta Lynn in her presence.

"Furnace Room Lullaby" is the follow-up to 1998's "The Virginian," which whipped folks into an adoring frenzy. Since then, she's appeared on the Pine Valley Cosmonauts' "Salute to the Majesty of Bob Wills" and put out split singles with Kelly Hogan and Whiskeytown. She'll also be appearing on the upcoming Bloodshot Fifth anniversary compilation due out in the spring of 2000.

So let Neko sing you one of her lullabies. It may not do much to soothe your soul, but it helps to have something to listen to while you are methodically cutting your ex's face out of the photo albums. ¾.

I'm really into road porn," says Neko Case ofihandedly. The insurgent country honkytonk singer and sometimes drummer of Canadian girl bands Maow, a punk-pop trio, and the Corn Sisters, a raw country duo, is regaling me with tour stories that are starting to sound dubious. "In Calgary, the Corn Sisters stayed with a club owner who had a women's prison-style shower in his house. We were immediately psyched-women's prison shower photos! We bought a bunch of chocolate syrup and threw it all over each other to make false blood, then made him take pictures. He was a sport about it, though."

As if any convincing would have been necessary to get some guy to document three chocolate-covered rock chicks wrestling naked in his shower.

"Another time, Maow was in a hot tub and we realize the water was yellow and looked like pee. And we'd just seen a urine sex page on the Internet, so we got the roadie for the other band to photograph us in it...

If Case hadn't told me that she recently graduated from art school, and if I hadn't experienced Canadian tour monotony firsthand, I'd think she was making this shit up for my amusement. The audacious, bodacious 27-year-old certainly has the imagination to dream up such scenarios, but it's also conceivable that she would act them out, having delivered the biggest slice of vavoom to alt.country [with] The Virginian (Bloodshot), her solo debut.. .Her vocal bitch-slap completely demands your attention.. Case is Jeannie C. Riley, Rose Maddux and Mae West all rolled up into one glorious gal. Her voice sometimes slips out of control like a hydroplaning motorcycle as she belts, pines, whoops, hollers and, but Case more than makes up for it with sheer boldness; even her torchy heartbreak songs are chock-full of cheeky punk attitude.

Heartbreak is at the core of The Virginian; it was the painful demise of a six-year relationship with a fellow Vancouver musician that shifted Case's immediate musical attention from punk to country.

"I sat down to write songs and they just came out country," she says. "When you're writing, you appeal to your subconscious for help -- that's where really good lyrics and melody all come from. You can't force it, you have to just let it come out."

For years, Case sought refuge in punk, but by the late 80s she found that the scene was "pretty fucking macho. I mean, how many fucking Bad Religion records can you listen to before you say, "I'm not being represented here." I wanted to hear a woman's voice in music I could relate to, and I found it in my grandma's countiy music. It felt honest, very much from the standpoint of the working class or poor person, and universal. I wasn't as into political punk rock. I thought it was pretty same-y, and people who listened to it were often hypocritical and drew lines where lines where they shouldn't. For me, country was a revelation."

Given her background, it seems no coincidence Case ended up on Bloodshot Records. The Chicago-based label coined the term "insurgent county," representing a generation of kids who grew up with punk rock but are now seeking something a little more musically substantial. Their artists range from pure honkytonk to hyper-bluegrass to cowpunk to punch-drunk, but running through them all is the common thread of punk verve.

"I don't mean to dis punk rock. Thank god for punk," says Case. "It's the only reason I ever played music. Before that, becoming a rock musician was presented as this twisted, dreamy road-something unattainable."