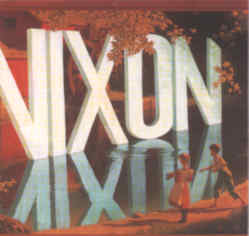 A LITTLE SOMETHING ABOUT NIXON...

"Scrubbing floors and emptying bedpans has as much dignity as the Presidency." Richard M. Nixon

This song plays with the idea of a legacy left behind. Nixon, as I recall, was a bit preoccupied with the notion of "legacy" as well. My friend Vic used to wear these gold slippers that he eventually wore out. He once asked me to keep a "look out" for another pair, so I tried to make him a pair of musical shoes. I somehow wanted to write a song that came from the point of view of the stereo talking directly to you, not the artist playing on it but the actual machine itself.

This is just a little song about trying not to be such an asshole.

I tried to carve out a classic here, a kinda Black-Bacarach thing. This is an examination of the "tough guy" image and how maybe the real tough guy is one standing in front of a crowd singing "just like a little girl." Now add to this the pressures of living and how it can grind your ass down and the rush of salvation that love can bring to the situation. Even a butthole like Nixon had a heart, he had a family he loved. ..For some reason I wanted to add to the song a postscript that if any of this looks like fun, think again, choose an alternate route.

If you listen close at the beginning you can hear the voice of Lilly, the first of the children born to members of Lambchop. We now number four within the group and this record is dedicated to them. We consider them the more "sustaining" of our creations. The real "Up With People" was a traveling choir/charade that would pass through the public school systems across the USA during my youth. They were clean cut "Pat Boone" looking motherfuckers, young republicans telling the "youth" how to live their lives, imposing their values on the captive audiences that were their prey during most of the "Nixon" era. Perhaps a coming to terms with the whole procreation issue and my eventual embrace of the really enjoyable activity of making babies. The Choir heard here is a collection of pro singers and some members of the "Bobby Jones Gospel Singers." They were a joy to work with and took a personal approach to what they were singing. They wanted to know what I meant by "progeny". I think they thought that it had something to do with the devil, or something. I nervously replied that it was about the celebraUon of "the child". "You know, come on children", to which one singer replied "Amen!".

This started out as a portrait of our sound maker/engineer Marky. A picture of him, drink in hand, leaning against the cou.nter... now pan out to the neighbors in the street and their own boozed fuelled activities. Cut to the old hoot owl on the tree limb above and his search for prey, eyeing the whole crazy scene. Cut to the man coming out from the subway, lighting a smoke and spitting on himself in a sad effort to be cool, dissolve into an inner city evening, gaze upon the ones we love. Ah, love. I wrote the melody sitting around my friend Michael Aintright's apartment. He delivers magazines for a periodical called "Nashville Parent". It's a yuppie rag that targets the new baby boom here in town. I was plucking out the tune while Mike was relating to me the trials of his work day and the futility it inspired in him.

WHAT ELSE COULD IT BE

Just a straight up love song, more musings on the "salvation through love" theme. Soul, sex, Nixon? Sounds good to me.
.c'mere sugar.

THE DISTANCE FROM HER TO THERE

I wrote this sitting on my back porch steps, the stars above me, just watching the dogs pee and sniff things on a summer's night. Thinking about my wife just inside, washing up from dinner. Think mg of the things that may lay ahead and that happiness is, just maybe, not that far away. For some reason I remember seeing this old bone that the dogs had discarded after having chewed and sucked the very life from it. This contrast interested me.

THE BOOK I HAVEN'T READ

Curtis Mayfield and I did not sit down and write this together. What happened was that I intentionally lifted a line of music from his fabulous tune "Baby It's You" and used it for my own purpose. I just wanted people to know he had some direct influence on the tune and, of course, give credit where it is due. I'm really proud of this song. For me it was kind of a watershed in terms of laying "it" out on the line. I wrote this for my beauUful wife, just straight, sappy, sentiment. The string introduction felt a bit goofy when we first recorded it so we flipped the tape over and tried using it backwards only to discover it sounded about the same. We found that when we blended the two parts together that they became more interesting than either by themselves. The process was excruciaUng and I almost vomited from the exercise of thinking backward and forward simultaneously. Before this was mixed, this was my least favourite representation of what I had in mind. It now is my favourite. The Book? The book of love, silly.

Here the record takes an ugly turn, much in keeping with the Nixon analogy I've been milking. This was written with a good friend in mind and the dark time he was going through. I was just trying to put myself in his shoes for a while. From this experience I concluded that ultimately what saves us is love. Not God, not our friends, not the law or religion, but our capacity to love and be loved. Simple really. In looking at the record as a whole it had up to now been a very pleasant, controlled, listening experience. It just got worse...

This is an old "folk song" from what I understand. I have never actually heard how it is suposed to go. I came across it in an old Harry Smith anthology song book. I never p~id attention to the music that came with the words. I just made up a tune that I thought worked with the flavor of the story. I like the words very much and we've been playing this song for over ten years now. I always thought it was the daughter that kills herself at the end of the story but have come to find out recently from a fan from Wales that it was the mother that hangs herself from the shame. ...ummm, which brings us back to Nixon doesn't it?

"NIXON'S THE ONE"
campaign slogan for Richard M. Nixon