"Beneath The Country Underdog" 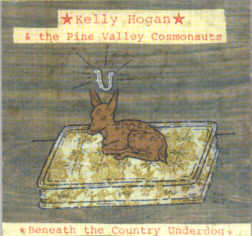 All the critics just love Kelly Hogan. She Sings so preffy and they all coo. Yeah, whatever. But, you know something? What a bunch of guys in brown "Members Only" jackets with an acre of skin between their eyebrows and their foreheads say doesn't necessarily mean that people are gonna stand in the cold rain, waiting for a late soundcheck to finish up. But when the spotlight hits this Atlanta gal and Hogan Hollers - it's usually four deep at the bar and a steamy flesh casserole in front of the stage - and it actually makes the dateless pointy heads know what they're jabbering about.

Hogan began to hone her mellifluously spooky welter of torch songs and honky-tonk anthems when she fronted the legendary peg-legged cabaret quartet, The Jody Grind - and then fanned the flames of her bummer-rock fixation while playing guitar for Orbisonic southern gothic punks, The Rock*A*Teens. Lately, she's kept her bad self busy with appearances on some clever and popular Bloodshot compilations, including songs on the Pine Valley Cosmonauts "Salute the Majesty of Bob Wills" and the recent tribute to the X/Blasters supergroup The Knitters, "Poor Little Knitter on the Road;" she split (with Neko Case) our Loretta Lynn tribute 7"; and she lent her pipes in a back up capacity to recordings by The Waco Brothers And Alejandro Escevedo, among others. All along, folks have been wishin' and hopin' that Hogan would really whip it out again, solo-style. Well, that time is now.

On her new record, "Beneath the Country Underdog," Hogan gets the backing she deserves from insurgent country ass-kickers The Pine Valley Cosmonauts (featuring members of The Waco Brothers, The Mekons, and The Bottle Rockets) - with made-in-Chicago production by misanthropic Welsh badboy, Jon Langford (another fellow that makes the pointy-heads ache). These 11 tracks - ranging from Hogan's haunting originals, to covers from Johnny Paycheck, Willie Nelson, and The Magnetic Fields - also feature a slew of hipster/hickster guest stars, including the most excellent Neko Case, Edith Frost, John Wesley harding, and Robbie Fulks.

When asked to name her musical influences for this new effort, Hogan rattled off a list that went something like "Lotte Lenya, Charlie Rich, Howard Tate, and Ronnie Van Zant..." Well, that sounds like 39:49 minutes of sobbing, throbbing, balls-out, country-soul to me, kids.

My name is Kelly Hogan.My dad is a policeman and my mom can make a pickle out of anything. I was born and raised in Atlanta, Georgia, but I got ants in my pants and moved to Chicago about two and a half years ago, and like it very much so far. There are lots of crazy-looking, freewheeling semor citizens walking around in sneakers on the streets here, unmolested. This gives me hopeful feelings about my future.
I've been singing as long as I can remember. My brother used to punch me in the arm for constantly harmonizing with the radio, yet I still could not put a sock in it.

I was in alot of bands in Atlanta. I guess the most relatively fancy ones would be The Jody Grind (where I was the lead singer) and The Rock*A*Teens (where I played guitar). I've also played and recorded with alot of folks since I moved North -- The Waco Brothers, Alejandro Escovedo, John Wesley Harding, The Sadies, Jon Langford, The Pine Valley Cosmonauts, and a slew of other nice people.

Here's the story of my new record: One brittle day last winter, my car broke down on the way to work as Bloodshot Records' Press Mule. I walked into the nearest place with a phone Ace Cut Rate Liquor Store & Lounge which also happened to have many delicious cold beers, and maany delirious old men watching Quincy on a black-and-white television. They were screaming at the t.v. "Quincy!!! Don't go in there! He's got a knife!" I automatically felt good in there, so I called Jon Langford to come give me a lift to work, and then settled in on a barstool.

When Jon arrived, he automatically felt good in there too so we decided that we should have those delicious cold beers and see how Quincy turned out. By the time the show was over, Jon had asked me to do a record with the Pine Valley Cosmonauts and I had said yes.

That's about it, I guess. to tour, so maybe I'll questions, just come up I hope you like the record. And I love see you soon. If you have any more and say hello. That'd be swell. Thanks.