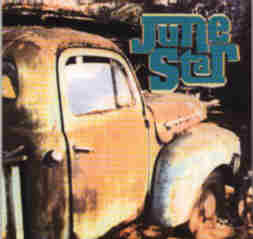 June Star is a rock band formed by singer/songwriter Andrew Grimm. That first incarnation of the band, born in the Fall of 1998, featured longtime collaborator Alan~epp on drums and acoustic cohort, Shane Foteete on bass. This three piece played throughout the Maryland, Virginia, and DC area to wide acclaim. They shared the stage with such luminaries as The Silos, Damnations TX, and the V Roys. During this time the band recorded and released its first independent full- length self-titled CD.

In June of 1999 Shatie left the band to pursue music and employment in North Carolina. The decision was made to not only replace the bass but add a second guitarist to further innovate June Star's sound. Alan Zepp's high school friend and college crony, JB Chenoweth stepped into the footprints left vacant by Poteete. Tim Johnson was found at a party talking about flat pickin' and bluegrass jams. After a brief audition in Tim's living room he too was brought aboard.

This new quartet holds the exciting qualities June Star had as a trio. Combining elements of Bluegrass, Velvet Underground, Tom Waits, and the Flying Burrito Brothers, June Star has continued to bring people out to hear good music. Electric guitars blazing or acoustics lulling softly, June Star has something for everyone. Although most of their sets consist of original material, they have been known to cover Neil Young, Miracle Legion, Credence Clearwater Revival, and the Velvet Underground.

If you are interested in booking or interviewing June Star, please contact Andrew Grimm at the above phone number or email.

Other bands June Star has played with: