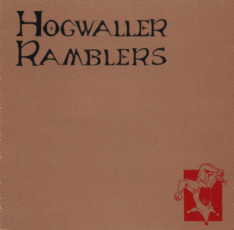 Hogwaller Ramblers, Charlottesville's most celebrated and infamous unsigned band, announce the release of a long-await ed debut CD. The self-titled recording will be released on Friday, January 22, 1999 at a release party that evening at Miller's on the Downtown Mall (109 W Main St.). The music will start at 10:30, and admission to the show will be $6.00. CDs will be on sale this night only for $10.00 - $4.00 less than the retail price. CDs will be available at both Plan 9 loca tions and Spencer's 206 on the following day. The CD will also be carried by many non-local outlets (to be announced), and customers may order online at WM'w.hogwaller.com. In addition to the CD, the band hopes to have t-shirts and other merchandise available for sale.


The CD is the result of three weeks of recording at a local former gun factory in October with Production by John Alagia, who has produced and engineered many local and national bands: The Dave Matthews Band, Shannon Worrell"September '67, Agents of Good Roots, Ben Folds Five, Earth to Andy and others. The tracks are predominately the work of bandleader, Jamie Dyer and also including an instrumental by former member, David Goldstein, a remake of AC/DC's "You Shook Me All Night Long" and two traditional American tunes.

The CD begins with an introduction and short song by Charlottesville legend, Sydney Tapscott and continues as follows:

The music of the Hogwaller Ramblers has most acurately been described as "Bluegrock": blending almost every con ceiveable style of American music from Old Time to Modern Rock, with an emphasis on improvisation and boundless energy. It's a mix of ecclectic instrumentation, wits and musicianship that has earned them a quizzical respectability and a somewhat twisted loyalty in Charlottesville. The music is as varied as the ages of the members - ranging from 18 to 60+

- but blending in performance into a cohesive and defining presentation. Q~r's songwriting can swing from complicat ed-yet-tonal Jazz melodies to mock-sad, satirical country ballads. Besides the original songs (which comprise roughly 60% of their regular performances), covers include The Rolling Stones' "Gimme Shelter", Johnny Cash's "Fulsom Prison" and Tom Waits' "Gun Street Girl" to name a few.


The Hogwaller Ramblers currently play at the Buddhist Biker Bar & Grill (Elliwood Ave. on the Corner) every Thursday night and ESCAFE' (West end of the Downtown Mall, across from the ice rink) every Sunday night. Occasionally they can be heard at Miller's, Trax and other local venues. An upcoming regional tour is planned, but no dates have been set. Further information can be found on thefr website: http:llwww.hogwaller.com.