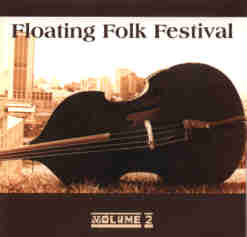 The Floating Folk Festival is a Richmond, VA based collective of acoustic singerlsongwriters that was founded by musician, artist and producer Brooke Saunders. The group has grown since their first Planetary release, Floating Folk Festival Vol.1, but their mission remains the same -- to create a unified platform for local musicians and to provide each other with mutual support. Several of the artists from the first compilation return again for Volume 2, but there are also some new faces in the crowd. The CD features 15 songs by 15 artists.

Floating Folk Festival Volume 2 runs the gamut of folk music--from comedy to tragedy, and the sacred to the profane. You'll hear the full spectrum of the Richmond folk movement: solo projects and group efforts, veterans and newcomers, male artists and female artists. With several hundred shows under their combined belts, it's time you gave these fine folks a listen.

"The Floating Folk Festival is a movable feast of song!"
Dirty Linen