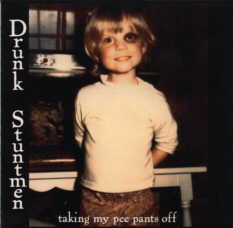 Drunk Stuntmen formed in 1991 under the name Soup. Playing in and around New England, Soup formed a strong fan base and an impressive roster of material in a short time. By 1993 they were performingto sold out crowds in their hometown of Northampton Mass., and making plenty of new fans in Boston, NYC and beyond.

A three song cassette and a four song 7 inch quickly followed and in 1995 the band set forth on a self-financed coast to coast tour.

1996 would be a year of upheaval for the band. They would now be known as Drunk Stuntmen with a new drummer, the addition of a piano player, and the inclusion of a pedal steel guitar. These changes would have a major effect on the sound and direction of the band.

What was once a groove oriented jam band would now start to clean house by writing smarter, simpler rock songs with a leaning twards the country/Americana sound. It was now time to debut this new material on a format that seemed to be the most accessable and user-friendly. Drunk Stuntmen were to release a full length compact disc or CD as it were.

In 1997 Drunk Stuntmen proudly debuted "Taking ~ Pee Pants Off'.'. Produced by Sub-Pop recording artists Mike Flood, the album is an "in the basementt1 experiment. Using minimal microphones and almost no overdubs, "Taking My Pee Pants Off" successfuly captured Drunk Stuntmen' 5 very live sound. Described by one critic as "rootsy roadhouse pop" the CD is an excursion through the songwriting styles of Al Johnson (guitar), Terry Flood (guitar), Steve Sanderson (guitar), and Jo Scott Brandon (bass) who each write and sing their respective songs. Filling out the band is Scott Hall (piano), and J.J. O'Connell (drums).

Currently working with yet another new drummer Dave Durst, Drunk Stuntmenk~now all too well how to roll with the punches. The band is currently putting the final touches on their latest studio effort. The full length CD is being recorded with the utmost care by Valley studio legend Mark Alan Miller and is expected for a late spring release.

HERE'S WHAT SOME PEOPLE HAVE TO SAY ABOUT DRUNK STUNTMEN AND THEIR NEW ALBUM:
"TAKING MY PEE PANTS OFF"

"The low-fi production helps to bring out the rootsy nature of the music~ This is essentially a boozy country/rock album that walks the line between the two in a way reminiscent of Wilco or The Stones on a country jag."

"Pedal steel, Harrimond organ, acoustic guitar, guest vocalists, and lilting vocal harnionies come in and out as needed to complement each song... if you pay attention to the lyrics, it sounds like they may have spent some time listening to wise=asses like The Replacements or The Elevator Drops."
Bruce Allen, The Noise 4/98

"Drunk Stuntmen are proud as punch over their brand new release, "Taking My Pee Pants Off": As well they should be... the 14 song offering is an infectious amalgamation of brash pop smarts and quirky country influences."

"Rocking along the Pavement/Superchunk axis and venturing into Golden Smog territory with their country-punk licks, Drunk Stuntmen show plenty of promise. Trying to build a national following on a shoestring budget is not for the meek and mild and these players have the resolve and experience... their latest CD shows flashes of brilliance.'.'
Don Fluckinger, The Valley Advocate 2/98

"The rambling blues, rock and country fusion album is filled with precious gems and diamonds in the rough"

"Many of the songs have a little Bob Wills woven into the melodies as the Stuntmen incorporate a wide range of instruments into the mix.00 all sorts of sounds can be heard on this album and Drunk Stuntmen pull it off with style."
Dave Burruto, V-Mag 1/97