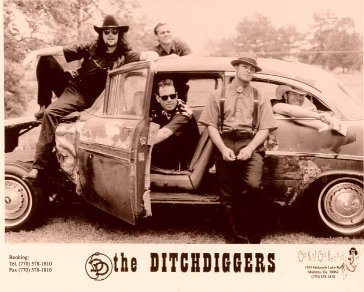 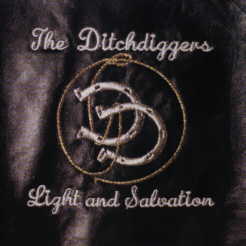 Inspired by their performance at a Cow Patty Bingo Festival, the Marietta, GA-based Ditchdiggers have literally put the "cow" back in cowpunk with the release of their first full-length CD entitled -- what else? -- Cow Patty Bingo.

Formed in 1994, the Ditchdiggers have become known for "roping and branding the cowpunk sound" according to Atlanta's Creative Loafing Magazine. While recording with Bruce Bennett at Exocet Studios in Atlanta, the Ditchdiggers were invited to play the Cow Patty Bingo Festival in Berkeley Lake, GA. "It was perfect timing," said rhythm guitarist Lars Nagel. "We had already written a song about a cow named "Belle Air" when we played the festival. Basically, you pay $5 for a bingo square on a big field and if the cow leaves a "patty" on your square, you win. It became clear that the game was like music -- it's a gamble and you never know it you'll have the lucky square. The cow ended up bekoming the theme for our entire project."

"The CD embodies our connection to the excitement of punk and country influences with the need to swing and twang," said Mack Blauvelt. "We created music that combined what we liked from both genres -- their early authenticity and raw, honest quality. It's not contrived. It all gets down to string instruments and a beat."

Their attitude is evident even before they take the stage. From the guitar that simultaneously looks like a western sunset and a dinged up saddle, (that Stuart built himself to 1950s Fender specifications) to the Pearl drum kit that Blauvelt upholstered in cow fabric, the audience knows that they are in for an experience. And when the band starts its energetic set, toes start tapping and no one finds it easy to sit still.

The idea for the Ditchdiggers was initially conceived by Gray and Nagel. They got the name from a Rocket From The Crypt song they liked. Neither had any formal musical training, but both possessed the talent to tell a story through music. They discoverd Blauvelt through an ad in the paper. He brought musical education to the round-up. While attending the University of California at Santa Cruz, he studied with both Bay-area jazz drummer George Marsh and Willie Winant, who was a percussionist with Frank Zappa and the Oakland Symphony.

The trio went through several bass players and guitarists, most with the name Bryan (four Bryans in all), before discovering their cowpunk roots. In fact, it took fans and other bands telling them that their music fell in the cowpunk category before they knew it themselves.

More ads and auditions followed before rustling up the Stetson-wearing bass player John Paul Stout to provide the rhythmic glue. The Ditchdiggers knew immediately that Stout would fit the bill both musically and personally. A talented player, Stout learned his first cords at age 12 from Waylin Jennings while his family was on a beach vacation in Jacksonville, FL. He had heard Jennings playing guitar on his balcony when curiosity got the best of him. Jennings invited him in and treated him to his first music lesson. Later, Stout studied classical guitar with Bill Moore of the Berkley College of Music before concentrating on the bass.

"I knew a group of guys from Austell, GA that needed a bass player. they had a top ot the line Fender bass and I gave it try. I broke three windows. I was hooked. I'm a big guy who likes big noise," he said.

Bryan Stuart rounded out the ensemble by providing the necessary cow-core, twangst-ridden, Southern guitar lines. He had been in a Florida surf band called the Strychnines when he first met Blauvelt. Stuart learned guitar mostly by emulating the sweaty backwoods sounds of guitarists like Link Wray and Hasil Adkins. Upon moving to Atlanta, Blauvelt looked him up and invited him to jam. "I was impressed by what I saw," Stuart said. "The rehearsal went well, but what really got me was the look in their eyes, like hungry prizefighters not afraid of getting in the ring." Stuart is the final "Bryan" to become a Ditchdigger.

This band of cowpunks couldn't be kept down on the farm. They started work on Cow Patty Bingo in the Spring of 1997, while touring regionally. Their travels took  them to a memorable performance at Pensacola, Florida's Springfest where they shared the stage with music legends Little Richard and Atlanta Rhythm Section.

Currently the band is touring in support of Cow Patty Bingo. Gray sums up the band's immediate goals best: "To be on the road full-time, scrape out a moderate living playing these songs all over the country and to sell lots of records." 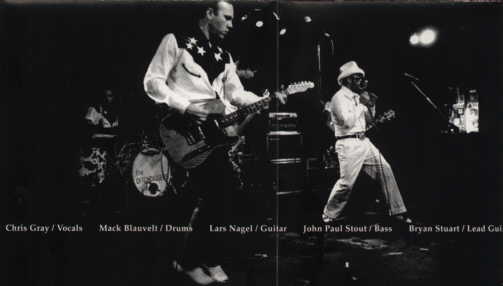