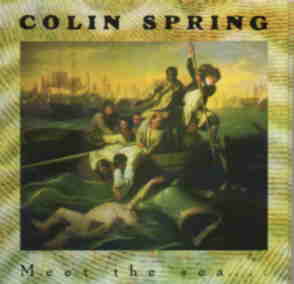 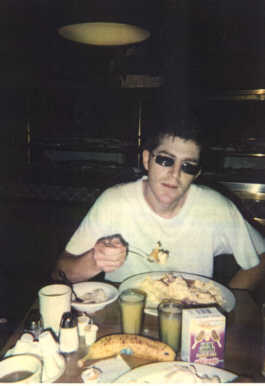 
The Crook in The Moon

The street lamp tips have struck a glow,
you find ourseif too far away from home,
The blacktop Is a matchbook flint,
the manhole covers about to blow their lids.
Wringlng hands cast shadow dogs,
how they twitch with nervous ticks,
Ivory poachers assess the tusk up in the sky
and they lick their evil grins

If there's a crook in the moon,
there must be thieves everywhere

The murky waters the plunging depths
will we all be fodder for the fish?
The barrenness of a peppered shore
is a land where Sherman, marched once more
with an usher beam down the fire roads,
stealing drinks torn the water tanks,
crreeping on the country porch
or murdered oaken planks

A tenor sax in the lone alcove
of an abandoned retail block,
The sidewalk cluttered with vagabonds,
a sea of handy legged drunks,
Roving' quilts of pink eyed spies
that patiently await their own demise
As eve departs with graceless bow
and surrenders to sunrise

There's' a crook in the moon,
holds a prospector's claim
like a nail In the wail
holds a picture frame

A hit man in a hotel room
in the conspiring hush of telephone talk.
With a whetstone blade to terminate
the cocksure stride of a deadbeats walk.
Into the silicon valleys
where the whIistle boys cat call skirts.
They flip their hair
as if to dare suggest a just dessert

There's a crook in the moon,
there's a light by the bed
Kill the switch my carting girl
Lay down your head

I covered ny back and I disguised my tracks
But the silhouettes of many threw down a great trap
To crucify, nullify, partition in lead
Well I gave it my blood if I never had bled
And I sat In surrender when my enemy ame
I am beaten in number not beaten in name
So be eyeless in part whether foe or friend
when you come to judge our reunion

I was born to a schoolhouse and there I should die
Learned in decision, learned in division
But the doors of perception were not mine to pry
I knew the warmth of ideals' I knew how the sun feels
The peasantry is not in position to blame
They're fed with the fingers of a fleshy domain
So be eyeless in part whether foe or friend
when you come to judge our reunion

I ate from the plate of a teacher I met
With her down cornered mouth I became her pet
Her fancy of fiction her girlhood
Her wornhood wept, her fantasy smalled
She knew and I knew for the love of defiance
All the noise that we raise we're stilt slaves to the silence
These meetings we hold though are never equal
What slinks to the hills gives birth to the sequel
Be eyeless in part

The midnight choir was singing praise for a poIiticians head
The flotsam jetsam thrown overboard when danger lurks ahead
Between the gulf of this and that the sea of everything
We're all just islands drifting, waiting to attach to anything

Last night I smashed starboard into whiskey on the rocks
I never saw the lighthouse I never saw the clocks
I washed ashore beached and bloated at five AM
Drained out the saltwater to fill it right back up again
And I don't need no girl Friday to patch up all my plans
I'd as soon meet the sea than to grasp ahoid of so many lending hands
Hands everywhere flailing limbs that grasp for air Wading out to meet the sea
Or be washed up, or be washed up

I come to be among you here I did not come to brood
But sne's laughing there like she just don't care well It puts me in that mood
I flipped a four top table cause those fishermen were talking crude
They upended me like a tackle box with hooks and sinkers
And if there's such a thing as one good cop you'd think he'd understood
I'd as soon meet the sea than grasp ahoid of so much drifting wood
Wood, build a ship and hoist the anchors free
A sailor's life a viking's death we meet the sea
or be washed up, or be washed up.

The Every Sidewalk Strut

And I, I know these streets, every's sidewalk strut on pigeon feet
Every dancing bear caravan, every smiling sun, every motel tan

Ten gererations of Conquistadors waiting on that Fountain of Youth,
An anointed purveyor of fantasy to dispense their perception of the truth
An apparition in the dick clack of a lumbering train
That brings the good hauzls the bad from this jumble wrackage of faces and names.
Dries you to a barstool
Promises tomorrow
And says give back all that empathy you took.
You bleeding heart I wrote the book
Let the previews trump up the feature billed then look at me Lord
I'll be standing still
Look at me Lord I'm standing still

And your mother's darling angels got a devil full of pride
with faith that seems to weaken in the night,
a pitchfork on your left shoulder and a sermon on your right
Don't you bend your halos when you're laying down at night?

Let me tell you bout the west coast
East came and the they bulldozed
And they threw up some landmarks on the sides of the roads
Then they forgot about those
When they tired of the traffic lights
On their cross continental flights
Well they built up the highways
And they orphaned their histories
And they left strips like these
Where a man and a woman can come
And start all over again
Let's start all over again
Start all over again.


Let Me Die In The Summertime

Ernesto's Pizza thrived until the day that I arrived
But the way I robbed that immigrant he could not survive
Shift change I'm out the door round closing time
Load up on boxes of Franzia wine
You'd be doing me a favor boss to restook your supply
Well, the neighborhood relies on your goods to get us by.

Now I see you outside in a halo of cherry bloom
Like your Monday is 'just a dish rag for your lazy afternoons
Maybe you're the fearless one to set your shackles free
Long before It was decided we'd become what we would be
And what we are
Re. cause I graduated to a full time job.
T 'lipped his pickup truck into a reservoir
And the wind still whispered through the evergreens
But it didn't feel like much more of a summertime to me
I resented that I did not sink down by your side
That I did not burn with you up in the summertime
Now all the feelings that I have are no fight to regain
You hold them near the surface inside your shallow grave

At the oak desk where you take your cheated test
I'm the wandering eyes of the ill prepared
The obstacle at the head of the stairs
Ambushes the unaware
The clicking turnstile on a subway train
Counts the customers, who pay
I hang around like a neighbor child
I won't go away

So you stand by the hanging bridge
By the lovers leap into the black abyss
I crawl up these canyon wall with a grip
that.Ioosens that slips and falts

There's no goodbyes
We put our lives behind us or ahead in billowed clouds
That float away or come to burst raining down to quench the thirst
Of the dust bowl cults that pray to sacred cows
And falling down on bended knee to a dirty droughts
epiphany to say.

"I believe in magic now"