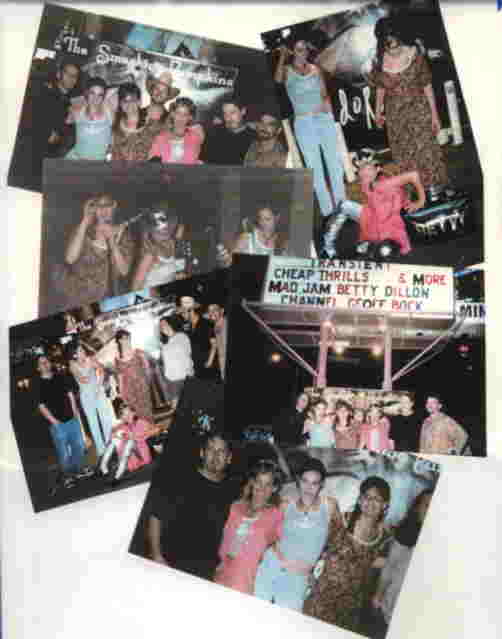 Betty Dillon plays music that honors the Independent spirit of the real life Betty Dillon. Part Cherokee and part Viking, Betty was an outsider who learned to live in twie with nature; To entertain herself, she would build musical instrutnents and then play sweet music to the stars,: the creatureS and the plants that she lived with. Soon, she met a Mexican Naguel who refused to take a name. She soon learned that this man was more of a performance artist than medicine man. Betty fell in love with this trickster and they had four daughters all named Betty Dillon. Although Betty Dillon did not invent anything, she had a grea,t respect for nature. She learned to talk to the plants, the insects, the animals and eve~Y the jrocks. Betty Dillon's deep understanding of wood transformed her into a great craftsman, but she was accused of being a witch for her radical ideas about sex roles and herbs. As the daughters grew,: they began to sing, dance and play together. The music they played is said to have been a cross between The Carter family and Robert Johnson, although no recording exists of the original music. Word of their talents grew and soon other folks were stopping by to listen, dance and even play. Every evening at twilightthe singing and dancing began. often it went all night. The handmade instruments Betty made were rumored be magical, but that was just because there was no word for Soul.

One night Betty disappeared. Nobody is sure if she met with foul play or if she simply moved on in order to maintain a low-key existence. The four daughters all lived bn the farm and continued the tradition. But when rn(~ney got tight the daughters joined a group of French gypsies that piayed strange, jazz music not unlike Django Reinhard. Three of the four daughters married gypsy husbands and each had a daughter alsd called Betty Dillon. The forth daughter disappeared until~the 1950's when she reappeared in Duluth, Minnesota. It is that daughter that taught a young Robert Zimmerman (aka Bob Dylan) to play blues harp. She was an old woman at that time and she was known to lie.

Like most people who come to California, I can longer read. I learned to play music from the waves, and I hear the sounds in the swirling way that Vitare Starro sees light. And I guess that's what the theme was that got me here. The light at the end of the sunnel, I mean tunnel. But the sun drew me here mostly. Promising to be my friend, and as an old chum who I recognized, the sun came to me in a dream. To you that might not count, but for me, my dreams have always counted double, and, like double coupon day, the store is always crowded.

Anyway, I dreamed about the sun with her yellow smile. She lights a cigarette and looks me up and down. "Ooh, you're pale, my friend. You look like you could use a little heat." And like a character in a Bob Dylan song, I say, "Yeah, I guess." Anyway, the bitch dumps me out in LA, with vague promises of my own sitcom. But it never happened. I'm not Jerry or Ellen or Frasier or Mary or Burt or Lucy. I figured I could have the Danny Show. It's a high concept thing. I'd be like a poor man's, jewish, black, hispanic Geraldo/Jane Curtain/Jane Mansfield/Curtis Mayfield/John LennoniWoody Allen kind of a guy/gal. I could have like one of those Sammy Hagar wireless mikes. I could be like a James Dean/Mick Jagger/Brooke Shields type. I could be like a female Candice Bergen or a female impersonator version of Merv. And, of course, I'd like to cut into Dave/Leno/Conan/Arsenio market by being white yet black or trying to be neither or better yet both. I could be half-black/half-white, half dog/halfsheepkindofathing.

I could be a rich man's Dan Rather, and a poor man's Barbara. I could be rich and poor, happy and sad. I could play Madonna in a pay-per-view that pits her against Michael Jackson, Mike Tyson, Leon Spinx and Tori Spelling. We get Courtney. It would be like Ruth and Gereig, Jordan and Pippen, we'd do Madonna and Courtney. I would do like lesbian stuff for $89.95. That's the right price man. It would be great. We could sell luxury boxes, oh, and the winner fights the winner of Howard Stem vs. George Foreman. And, all this is done naked (all my dreams are naked). That's California Dreaming, dig? Oh, and the Beach boys are playing a cover of an old Van Halen song that David Lee Roth used to sing. It was all pretty trippy until the money came along. I, myself, am called Mr. Rock and Roll. I am Chuck Berry. I play guitar just like him, and I'm bitter from the IRS prison thing. You don't see them throwing Elvis P injail.

Now I was dating or I should say fucking this young girl. I say girl because she was too young.
I like womens, but when the right young thing comes my way, sauntering, doing yoga right there
in the motel lobby, it gets me thinking. And I'm Richard Nixon, but not the real one. I'm Oliver
Stone's Oliver, I mean, Nixon, Exxon, Valdise. I am poetry.

So I was playing this riff. You know, a Chuck Berry riff because I am Chuck, and we1re rockin' and I'm in a foul mood because I don't want these boys takin' my dough. I'm working hard, playing Chuck Berry songs and singing the blues, greens but no reds (we went through all that pill stuff, and we just smoke reefer now because that's Chuck and I'm Chuck.)

So I figure if I get the right gig, blow the right executive, make a deal with the devil, like old Robert Johnson, then I will share the mythology. Me and Jimi Ilendrix jamming in a dream, the Beach Boys doing the harmonies, Miles Davis comes in to watch, "Yeah he says," like he's riding a horse, and me and Jimi doing the guitar wars thing. Jimi's laughing because he's having a real time, and I'm concentrating my ass of{ as the smoke exits my lungs and floats into the atmosphere. This is rock and roll, and here are the blues.

Now I'm supposed to be Bob Dylan and the Rolling Stones, be different, but familiar. Everybody wants the breakout single and they know I got it. Mister Rock and Roll, I got soul.

Relix
music of your mind

Doctor Dan's Music Show is a band that can be found currently doing the rounds of the New York club scene. The aim at an unpretentious blues-rock sound with funk and country influences, and do it well. The six-piece band is centered on guitarist, singer, and songwriter Dan Dubelman, and also includes noted bassist Jerry Jemmott and veteran jazz drummer Bernard Purdie. Rounding out the lineup are drummer Keith Copeland and keyboardist Bill Henry. Dubelman has some good songs that are a tad out in left field, while the band kicks up a storm, merging rock with blues, jazz, and funk. Dubelman is also a more
than competent guitarist...

RELIX
music for the mind

Dr. Dan's Music Show was previously reviewed lastyear, and its debut CD, Unheard Of, is now available.
It's an impressive mixture of poetic lyrics, classy jazz and blues-based rock. The songs of Dan Dubleman are spiced
up by some exemplary playing and a strong production. The opening song contains the great line "You take Bruce Springsteen far too seriously." Right on! Also of note are the eloquent "Flame" and the almost spoken Lou Reed-like "Opium.'1 Despite the Springsteen put-down, this album should appeal to his fans as well as those of Elliott Murphy and r Bob Dylan, especially if you like some inventive musical twists

Dan grew up on a movie se~ At 5 years old, Dan won a Gold Lion at the Cannes Film for his role in the "Sharing" commercial for Cracker Jacks which also featured Jack Gilford. Dan continued studying acting at Oxford where he concentrated on Shakespeare and Chekov.

Dan began playing music as a teenager. By the time he got to Cornell he was playing more than he was studying and still managed to make the Dean's List Dan applied to get into Pulitzer Prize winning writer Alison Lurie's elite class for fiction. Accepted, he began to write "American Trash", a novella This piece earned him a scholarship and fellowship to John's Hopkins world-famous fiction program under John Barth.

In 1988, Dan received an MA in fiction from Johns Hopkins He moved to New York where he started an independent record label and toured the U.S. with his own band, Dr. Dan's Music Show , playing with the likes of Bernard Purdie and Jerry Jemmott (the rhythm section from Aretha Franklin and BB King).

To recuperate from the road, he moved to Austin, Texas. He returned to New York but could not make ends meet, so he joined the Rolling Stones' review, Sticky Fingers, playing Keith Richards and touring the deep South.

By the Summer of 1995, he had had enough. He moved to LA. and put together another version of Dr. Dan's Music Show called Dr. Dan & the Perseriptions.. He met Vickie shortly theraafter and married her. The Perscriptions went on to play around L.A. and spent the whole summer of '97 playing under the beautiful sunsets of Venice Beach. They finished off the year by recording their album, "Complicated", at the famous Sunset Sound recording studio in Hollywood.

One night, Dan and Vickie got stoned and were hit by a revelation-Betty Dillon.. They would take their songs, add a touch of country, feature Vickie on more lead vocals, and get Claudia and Eddie to play guitar, dance and sing backup. Essentially, they would head back to their individual roots in country and blues. They would create an extended family with band members that could be tolerated on long bus trips and in cramped hotel roomi The next morning it still seemed like a great idea and the first rehearsal sounded like they'd played that way for decades. A few weeks later, the first gig as Betty Dillon was a smash hit with their fans.

Betty Dillon is now looking forward to recording more material and touring to wherever they can play their music and have some fun.

If you're wondering why we call him Dr. Dan, or why he's a General in the army of the Psychic Revolution--you'll just have to talk with him a while to understand.