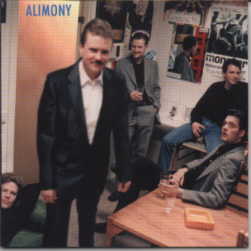 ".. one of the best debut albums ever to be released in this country"
Lennart Persson
Nöjesguiden, June 1999


"Even so, they maintain a healthy respect for traditions in lyrics and music while hitting a stark tone between melancholy and vulnerability that feels both strong and unique. Alimony are very impressive...."
Ha kan Steen
Aftonbladet, May 211999

"It takes a heart of steel not to be affected by former Skelleftea -based Fredrik Öster's sensitive singing and songs."
Pierre Hellqvist
Sound Affects #42, Spring 1999

"Debutalbum from a band out of Gothenburg. Sensationally good."
Tommy Granlund
Barometern, May 19 1999

"...but Alimony from Gothenburg (no less...) produce absolute world class noveau Country on their album "Bottomless~'. And - hold on to your hats -  I'll even go as far as saying that "Bottomless" beats Wilco's latest offering."
Per Bjurman
Affonbladet 'Reasons to be ecstatic" column, June 7 1999

"Bottomless is an album without weak spots. So far, it may well be the best Swedish debut album of the late 90's."
Anders Martensson
Kristianstadsbladet


At last years Hultsfreds festival 16 Horsepower was the band you absolutely were not supposed to miss, but did anyway. With this year's festival coming up I only have one thing to say:
Alimony. Do not miss them!
At least not if you appreciate music that touches you and hurts without having to hit you over the head with a hammer.
It is extremely tiresome to yet another time refer to the likes of Neil Young, Uncle Tupelo and The Band. It is even more tiresome to bring up completely worn out and meaningless expressions like "no depression" or "alternative Country" (whatever that is?). I'll do it now just so you'll understand where this band is coming from. Alimony has most certainly listened to the artists mentioned above, and they probably love the entire American musical tradition, but not for a second do they become slaves to their inspirations. They may move around in the same musical landscape as Wilco and Son Volt, but they don't have any trouble making themselves heard even in that company. At least not musically - this band is much better than most of what is sold as "no depression" - though there might be a marketing problem in releasing your album on a tiny, idealistic record company in Lund. Of course, this shouldn't stop you from going out and buying Bottomless, one of the best debut albums ever to be released in this country. An album that almost, but just almost, does full justice to the magnificent live band Alimony. It is probably due to economical considerations that the production sometimes feels a bit unnecessarily boogie-ish and the sound a bit blurry and undynamic. While listening to Alimony I also listened to an album with Willard Grant Conspiracy, brilliantly recorded in an American studio, and just wished that the boys from Gothenburg would have gotten the chance to record under the same circumstances. Everything else is already there. Nothing can diminish Fredrik O~sters well made, sparklingly beautiful songs, with their plain and striking lyrics. To boot, he sings them with a genuinely strong and sensitive under-your-skin voice. These songs are the soul of the band, it's around them that the band moves in its subtle, yet powerful way, and with a confidence that makes the band unique in their league. A lot of other European bands that clearly pull Lowards Lhe Aluerican tradition often fall into cliche's to compensate the lack of a natural connection to the same. Judging from how Alimony sound, they have never even been close to falling into that trap.
Next time around, great things can happen. Put the band in a better studio, with a gutsier producer and let someone with a more developed aestethic sense design the cover, and even the big country to the west will fall on its knees.

First Deeptone the other week, and now Alimony. Ramblin' Records from Lund sure know how to find talented Swedish Alternative Country band. With a debut as solid as "Bottomless" this quintet from Gothenburg steps forward to the cutting edge of the genre. Alimony move in the same musical areas as Townes Van Zandt (the title track is a powerful tribute to the fallen hero), early Jayhawks and Wilco around "Being There". Even so, they maintain a healthy respect for traditions in lyrics and musicwhile hitting a stark tone between melancholy and vulnerability that feels both strong and unique. Alimony are very impressive, and if you don't believe me you can see for yourself at the Hultsfred festival.


Aftonbladet
June 7, 1999
by Per Bjurman
Reasons to be ecstatic (weekly column)


Nusicians from around these parts always seem to have as much trouble with Country as with reggae, but Alimony from Gothenburg (no less....) produce absolute world class noveau-Country on their album "Bottomless".
And - hold on to your hats - I'll even go as far as saying that "Bottomless" beats Wilco's latest offering.

New label Ramblin Records first releases come bumper to bumper. Following the much acclaimed Deeptone and their debut album "Let them be wrong", the time has come for Alimony's debut. At a slightly slower pace, more pensive and melancholy than their colleagues in Deeptone, Alimony from Gothenburg offer music with more distinct Country traits. Singer/songwriter Fredrik O~ster is brilliant, the backing solid and confident, with a special bow to Gunnar Frick on pedal steel. Alimony can be seen and heard at the Hultsfred festival this summer.

Even the Swedish rock scene has started producing their own No Depression acts. Alternative Country inspired by Gram Parsons and Uncle Tupelo. Alimony based in Gothenburg create haunting mood-Country in the lines of Son Volt and Whiskeytown. It is a magnificent debut.


There is no doubt about it. The most competent A&R staff during the last six months can be found on the newly started label Ramblin' Records in Lund. A couple of weeks ago Deeptone from Almhult, interesting newcomers to the alternative Countryrock scene, released their debut album on Ramblin'. Now Alimony from Gothenburg proves that Gram Parson has not only affected generations of Americans. Singer/songwriter Fredrik O~ster has the same feeling for Parson- Country as Jay Farrar of Son Volt, and the same talent for making pop tunes as Jeff Tweedy of Wilco. Besides, he's an excellent singer with the ability to change from quiet vulnerability to a cocky rock'n roll attitude.
In "All we had (was each oLher)" Alimony gives us a "Love Hurts" for the 21st century, in the dramatically constructed "Revolution" Bjarne Karlsson's Roy Bittan-piano rules, and in the title track (a tribute to Townes van Zandt) O~sters voice meets Karlsson playful pump organ. Much more could be added to the list. "Bottomless" is an album without weak spots. So far, it may well be the best Swedish debut album of the late 90's.

Alimony is one of Gothenburg's favorite bands, and play gritty Country Rock with a Hammond organ and pedal steel backing the beautiful words of Fredrik Oster. They're one of the few "do-not-miss"-bands at this year's Hultsfred festival.
Listen closely to the Townes Van Zandt-tribute Bottomless: "Tonight I'll sing my favorite song and try to hide the pain. As the curtain falls the lights go out, I'll try to hide the pain".

Debut album from a band out of Gothenburg. Sensationally good.
Swedes that have a natural feel for Country are so extremely rare that I'm always struck with amazement every time I hear Country that is for real. Alimony are more than that. They are very, very good. Solid Country Rock of finest quality. The songs are and perfomances are high class, melodious and professional.
A lot of people blabber on about "No Depression" these days. Granted, the original wave generated a lot of good music, but it has long since become a tired and somewhat trendy cliche. Alimony will probably be nonchalantly stamped as "No Depression But Alimony is really something completely different. They stand for a more solid, deep-rooted Country Rock, in the spirit of Gram Parsons and the Flying Burrito Brothers. The track "All We Had (Was Each Other) is fairytale-beautiful Country performed with a rock'n roll aLUiUud~. IL's brillianL enough to have sat well even on one of The Burritos early epoch- making albums.
Fredrik Öster, who sings lead and plays acoustic guitar, writes strong songs with pwerful melodies and and a genuine feeling for the genre. His voice sounds hurt, shattered and overcome with resignation as he delivers the lyrics. The band sounds as good playing a Rock'n Roll song like "Lead Me Straight" as in the melancholy "I Fear Myself" with its crying steel. Excellent production by Göran Svenningsson. It may seem odd, but using a producer with his background in the Swedish blues scene may have been a stroke of genius.
Making comparisons with The Flying Burrito Brothers may sound almost unhinged, and naturally Alimony are not quite as magnificent yet. They are, however, very, very good and "Bottomless" is sensationally strong album.

I think I'm getung a new favorite record company. Ramblin' Records from Lund released Deeptone about a month ago. Now it's time for Alimony from Gothenburg and their debut album. This is just as good as Deeptones album, an album that totally knocked me out. Yes, it is Americana-ish and melancholy, and it could easily have become pathetic and a copy of the American originals. But this only sounds fresh and relaxed. It feels fantastic to be able to say that Alimony are already in the same exalted league as Wilco, Son Volt and The Original Harmony Ridge Creek Dippers, even Jayhawks. We're talking emotional Country Rock. "All We Had (Was Each Other)" is brilliant and makes me want to cry, just like the even better "Lead Me Straight". During the 27 years I spent in Gothenburg, I never once imagined the town could produce a really good Country band.

Alimony from Gothenburg is the second band to releasea full-length album on Ramblin' Records. And the label is true to form.
Alimony explore the same Americana niche as their label mates Deeptone - and they do it at least as well.
Fredrik Öster from Skelleftea who writes and sings the songs, does it - every time - with a tear in the corner of his eye. Northern melancholy soaked in considerable amounts of booze is a lethal combination for any dreamer or romantic.
The matchless opening with "Like a Waterfall" (did a Swedish band ever sound so, eh.... traditionally un- Swedish?) "Another Gathering", "All We Had (Was Each Other), "Lead Me Straight" and "Wishing Well" is nothing for wimps. A collection of songs like that might fool us into believing this is a record that was improvised in Mark Olson's and Victoria Williams' dusty backyard in the Mojave-desert.
The fact that "Bottomless" lose a bit of tempo towards the end doesn't really matter, Alimony's debut album has already made it all the way. A lethal record, at least for us wimps.